The lessons of Italy’s coronavirus crisis 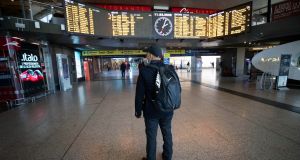 A fortnight ago, Michela di Maria noticed a trickle of cancellations for her family-run restaurant Due Ladroni, which is nestled between a medieval fountain and the east bank of the Tiber in Rome’s historic centre.

This Wednesday she handed out gloves and homemade masks to her handful of remaining staff, who served just nine customers, each of whom must by law sit a minimum of one metre apart.

“A customer who came yesterday was stopped by police who asked him where he was going,” di Maria told The Irish Times. “The atmosphere is very ugly and difficult, it seems like a city hit by war.”

Italy is reeling from the speed at which normality turned into a nationwide lockdown unprecedented since the second World War after the government ordered citizens to stay at home to try to curb the worst outbreak of coronavirus in Europe.

Since February 22nd the disease also known as Covid-19 has killed 827 people in the country, out of 12,462 registered cases so far, with the outbreak centred on the wealthy northern region of Lombardy.

Desperate to slow the spread of the virus and to prevent it crippling the weaker health services of the country’s poorer south, prime minister Giuseppe Conte unexpectedly extended quarantine measures to the whole nation.

By law, citizens can leave their house for essential reasons only, and are required to fill out a form that can be downloaded from the website of the interior ministry to justify their reason for movement. Overnight on Wednesday, the government ordered all restaurants like Due Ladroni to close too. Only essential services like grocery stores may remain open.

Medics, policymakers and ordinary people living in extraordinary times in Italy shared their advice with The Irish Times about what other countries so far dealing with smaller outbreaks can learn from Italy’s experience. Here are the top three recommendations that emerged.

1: Act earlier rather than later

If drastic measures will need to be taken, they are more effective if taken earlier.

“Around the world I can see a pattern of disbelief. No government, no country, no city wants to impose harsh shutdowns if they can avoid it,” said a policymaker who attended briefings by experts to Italian political leaders as they grappled to respond to the outbreak in recent weeks.

“That’s the mistake we made in Milan. We thought we can impose harsh measures only when the outbreak had got bad enough. We probably wasted one precious week at least, if not two.”

Slowing transmission early crucially prevents the number of patients overwhelming the the capacity of the healthcare system to cope, which affects how fatal the disease can be.

In Italy, a quarter of Covid-19 patients have been hospitalised, a fifth with “critical” symptoms. Faced with a shortage of intensive care beds, the professional body of anaesthesiologists, the SIAARTI, has issued guidelines to prioritise younger patients and those “with the greatest chance of survival”.

“There aren’t ventilators for everybody. We have to make a decision on what patients to treat,” said Mario Riccio, an anaesthesiologist working at the heart of the outbreak in Cremona.

“I believe that European countries with fewer cases will soon have this problem. They must make a balance between available resources and ethical choices about who to treat,” Riccio warned. “They need to understand now what resources they have, how many intensive care beds.”

The Italian health system is regularly assessed to be among the best in the world, but years of tight funding mean it has no extra resources to deal with a surge in demand.

“Our system is super high quality but at the same time it’s always working at its maximum capacity. When the emergency happens, we don’t have that stretch, that extra capacity,” said the Milan policymaker. “We have doctors working 24 hours a day, the nurses are sleeping at the hospital, they haven’t seen their families for three weeks.”

Disagreement among experts about the best course to take, which is normal in the face of evolving scientific evidence about a new disease, needs to be communicated carefully. A cross-party approach to decision-making helps public trust, and reduces the spread of confusion through contrary claims about the disease.

“The decrees of the government at times were made to seem like they were the opinion of a particular political faction,” said Daniele, a government policy worker in Rome. “It would have helped if there was a less competitive dialogue over what measures to take.”

Above all, clear and open communication is key: the government must not just announce decisions, but explain why they are important, and the process by which the decisions were arrived at, taking the public along with them where possible, Italian policymakers said.

“People need to know it could be their parent, their grandfather who could be in intensive care,” said Sebastiano Lavecchia, a student living in total quarantine to protect his family from potential exposure at university. “These measures are a necessary sacrifice.”