Usual military parade and pomp missing because of coronavirus pandemic 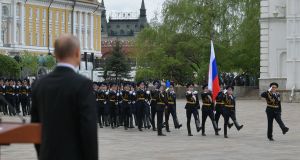 President Vladimir Putin told Russians on Saturday they are invincible when they stand together, as he presided over celebrations of victory in the second World War Two have been slimmed down because of the coronavirus outbreak.

His speech, beamed to the nation, sent a message of unity as the Kremlin tries to contain the coronavirus – and Mr Putin tries to keep his ratings high – after Russia passed Germany and France to register the fifth-highest number of cases globally.

Victory Day, which marks the Soviet victory over Nazi Germany in 1945, is one of Russia’s most revered public events and provides Mr Putin with a platform to promote patriotism – a cornerstone of his popular support.

But the coronavirus outbreak forced him to postpone the main highlight, a huge annual parade on Moscow’s Red Square that showcases Moscow’s most sophisticated military hardware.

In his first public appearance for weeks, a sombre-looking Mr Putin settled for a more low-key remembrance ceremony, but made clear he still planned to hold the usual parade to mark the 75th anniversary of the Soviet victory when the time was right.

“Our veterans fought for life and against death, and we will always try to live up to their spirit of unanimity and resilience,” he said after laying a bouquet of red roses at the Eternal Flame war memorial near the Kremlin.

“We are united by our shared memory, hopes and aspirations, as well as a sense of shared responsibility for the present and the future. We know and strongly believe that when we stand together, we are invincible.”

Guards from the Kremlin Regiment marched past after the Russian president spoke, and a military band played the Russian national anthem.

Overhead, 75 military planes and helicopters, including advanced Sukhoi Su-57 stealth fighters, flew over central Moscow despite cloudy skies, with one group of jets leaving a trail in the sky in the colours of the Russian flag.

In the absence of the usual ground parade, state television broadcast a replay of last year’s Red Square event.

Similar fly-pasts were held in other Russian cities. Fireworks will be let off across Russia once darkness falls.

Mr Putin (67), has in previous years basked in national pride during the event, watching Russian tanks rumble across the square with world leaders by his side. But a recent poll gave him his lowest approval rating in more than two decades, albeit at a still high 59 per cent, and Russia’s economy is slipping into a deep downturn.

The coronavirus forced him to postpone a nationwide vote that was planned for last month and which he hoped would endorse constitutional changes allowing him to extend his rule until 2036. That vote is now expected to be held later this year.

Moscow and other regions have observed lockdowns since late March to try to slow the novel coronavirus, which has infected almost 200,000 Russians so far and caused more than 1,800 deaths.

Mr Putin has accused Russia’s detractors of diminishing the Soviet war effort, and on Friday he warned post-Soviet leaders against what he said were attempts to rewrite the history of the second World War.

On the eve of the anniversary, Mr Putin sent congratulatory letters to US president Donald Trump and British prime minister Boris Johnson, suggesting the need to rekindle their nations’ cooperation during the second World War to solve modern-day problems.

In his speech, he did not mention coronavirus — Russia has nearly 200,000 confirmed cases — or how its spread had blocked the observances that were to be a prestige project for him, but he promised that full commemorations would take place.

“We will, as usual, widely and solemnly mark the anniversary date, do it with dignity, as our duty to those who have suffered, achieved and accomplished the victory tells us,” he said.

“There will be our main parade on Red Square, and the national march of the Immortal Regiment — the march of our grateful memory and inextricable, vital, living communication between generations.”

The sharply reduced observances this year left a hole in Russia’s civic and emotional calendar. Marking the war, in which the Soviet Union lost an estimated 26 million people including 8.5 million soldiers, has become a fundamental piece of Russian national identity.

Russian officials routinely bristle at criticism of the Red Army’s actions in the war, denouncing the comments as attempts to “rewrite history”.

An online substitute for the processions took place and many people were expected to display relatives’ photos from their balconies and windows in the evening.

In one of the final events of the VE Day commemoration in western Europe, which took place a day earlier, Berlin’s landmark Brandenburg Gate was illuminated late on Friday.

The words “Thank You” against a blue backdrop were projected on to the monument in Russian, English, French and German.

Earlier in the day German President Frank-Walter Steinmeier described May 8th as the day Germany was also “liberated” from Nazi dictatorship. – Agencies