Independence a thorn beneath Catalan day of books and roses 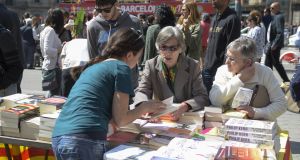 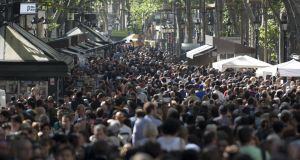 Crowds of people on the streets of Barcelona on Sant Jordi, the celebration of Catalonia’s patron saint, on April 23rd. Photograph: Robert Marquardt/Getty Images

By 10am a human tide is already washing over Plaça de Catalunya and down La Rambla, tens of thousands cheerfully conscripted in an army whose twin mission is to browse and purchase. Around the corner in the Regina Hotel, past security and milling crowds, dozens of writers with Oscar-night duties pose for photographs in choreographed groups before they spill on to the streets to sign books and soothe fans.

It is, as Catalan writer Màrius Serra says resignedly, “only one day a year” – a fleeting but significant moment when Barcelona’s writers are at the centre of the city’s consciousness.

Sant Jordi is Catalonia’s day of books and roses, an annual celebration of the region’s patron saint who also answered to “St George”. The reason for its status as the most popular date in the Catalan calendar depends less on its origins than on where you are coming from: Sant Jordi is a commercial boon for writers and booksellers; a concentrated means to express Catalan identity; and a grand occasion of ritual and tradition for the masses on which love and literature collide.

Historically, men gave women roses on April 23rd in honour of Sant Jordi – a rose is said to have sprouted in the blood of the dragon he defeated – with books becoming part of the story early in the last century to commemorate the death of Miguel de Cervantes. In 1995, Unesco adopted the date (which also marked the death of William Shakespeare, in 1616) for World Book Day. Nowadays in Barcelona, both men and women commonly buy books for their partner to mark the occasion.

Sant Jordi is not a public holiday, so its crowd-pleasing occurrence on a Saturday this year drew many more thousands from their homes. You would hardly think to notice, among the miles of crowded book stalls on the grandest avenues, the heaving pavements and high-spirited rose-seller booths (wax, ceramic, plastic, wood . . . and actual flower), that at the present moment Sant Jordi underlines not just commonality, but also difference. Figuratively, the occasion is a sweet-scented rose with a thorn: a celebration of Catalan culture – whatever you consider that to be – at a time of an increasingly shrill independence debate.

As Madrid prepares for another national election in June, the Catalan government, under its new president Carlos Puigdemont, is pressing ahead with an 18-month roadmap towards independence, putting in place the infrastructure necessary to draw up a Catalan constitution, hold a referendum on it and declare an independent state. But of the major parties in Madrid, only Podemos is supportive of the referendum proposal and, at the last count, only 48 per cent of Catalans backed pro-independence parties in regional elections. Not insignificantly, many more support the idea of a debate-settling referendum.

Still, with momentum behind the pro-independence campaign, and no progress in sight on economic and legal concessions long sought from Madrid that might take the wind from beneath it, the secession question appears bound to reach a point that is fractious and, at least politically, confrontational.

Adding further complexity, the range of ideologies among those batting for independence – from the far-left CUP party to Puigdemont’s pro-business, right-leaning Convergence – has made some Catalans who might be sympathetic to an independence cause suspicious of political self-interest.

The blurred lines – the commonality, the difference – appear to be condensed into a text message that arrives from Cristina, a Catalan friend: “My parents (from f**king Andalucia) are now ultra-independence: what’s going on?!?”

And so, on Sant Jordi, the pro-independence book stalls and the Catalan flags carry a significance more lasting than this one-day celebration of regional pride and tradition.

At the booth of the centre-right Ciudadanos party on Rambla la Catalunya, Júlia Calonge makes the pro-business case against independence, but also expresses the more fundamental private logic of identity and belonging: “I am Catalan and Spanish, I am both at the same time. I cannot be either. I’m from Barcelona, I’m Catalan, I’m Spanish and I’m European.”

Elisabeth Massana, a bookseller at La Central del Raval, says that although Sant Jordi’s institutional links inevitably tie it to the independence issue, the day has also managed to “escape” from the institution.

“There’s a lot of people who celebrate it and live it and feel it who are not engaged in any way with independence, or who don’t agree with the possibility of a referendum,” she says.

For Catalan writer Màrius Serra, the enduring misunderstandings between Catalonia and wider Spain that have brought the secession issue to this point are encapsulated by what he calls the most terrible question he is ever asked: “Why do you insist on writing in Catalan?”