French anti-terrorism police converged on an area northeast of Paris on Thursday after two brothers suspected of being behind an attack on a satirical newspaper were spotted at a gasoline station in the region. Video: Reuters 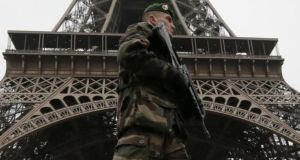 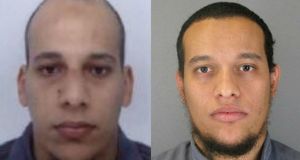 Photograph released by the French police of the brothers, who are considered armed and dangerous, and are actively being sought in the investigation of the shooting at the Paris offices of satirical weekly newspaper Charlie Hebdo on Wednesday.Photograph: Reuters/Paris Prefecture de Police/Handout via Reuters 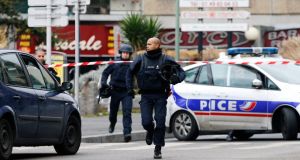 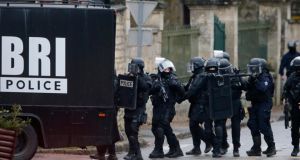 French special intervention police conduct a house-to-house search in Longpont, northeast of Paris, in the search for two brothers suspected of carrying out an attack on the satirical newspaper Charlie Hebdo. Photograph: Reuters 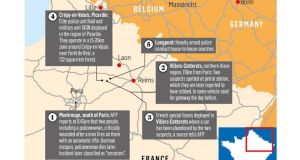 French anti-terrorism police converged on an area northeast of Paris today after two brothers suspected of carrying out an attack on a satirical newspaper were spotted at a petrol station in the region.

There were reports of heavy police presences around the thickly wooded area near a petrol garage where Said and Cherif Kouachi were apparently sighted earlier today.

Two police sources said the men were seen armed and wearing cagoules in a Renault Clio car at a petrol station on a secondary road in Villiers-Cotterets about 70km from the French capital.

France’s prime minister said on Thursday he feared the Islamist militants who killed 12 people could strike again as a manhunt for the two men widened across the country.

A policewoman was killed in a shootout in Paris earlier in the day, but police sources could not immediately confirm a link with Wednesday’s killings at the Charlie Hebdo magazine.

The bells of Notre-Dame cathedral rang out during a minute’s silence observed across France and beyond.

Prime minister Manuel Valls was asked on RTL radio after an emergency cabinet meeting with president Francois Hollande whether he feared a further attack.

“That question is entirely legitimate, that’s obviously our main concern, and that is why thousands of police and investigators have been mobilised to catch these individuals.”

Police earlier released photographs of the two French nationals still at large, calling them “armed and dangerous”: brothers Cherif and Said Kouachi, aged 32 and 34, both of whom were already under watch by security services.

Late Wednesday, an 18-year-old man turned himself into police in Charleville-Mezieres near the Belgian border as police carried out searches in Paris and the northeastern cities of Reims and Strasbourg.

A legal source said he was the brother-in-law of one of the main suspects and French media quoted friends as saying he was in school at the moment of the attack.

Police have tightened security at transport hubs, religious sites, media offices and stores amid unconfirmed reports of sightings of the assailants. One police source talked of a type of “psychosis” setting in with various reports and rumours, but police had to take each of them seriously.

The defence ministry said it had brought in an additional 200 soldiers from parachute regiments across the country to Paris to take the number of military patrolling the capital’s streets to 850.

France held a day of mourning on Thursday for the slain journalists and police officers. Tens of thousands took part in vigils across France on Wednesday, many wearing badges declaring “Je Suis Charlie” (I Am Charlie).

Muslim leaders condemned the shooting but some have expressed fears of a rise in anti-Islamic feeling in a country with a large Muslim population.

Police sources said the window of a kebab shop next to a mosque in the town of Villefrance-sur-Saone was blown out by an overnight explosion. Local media said there were no wounded.

Islamist militants have repeatedly threatened France with attacks over its military strikes on Islamist strongholds in the Middle East and Africa, and the government reinforced its anti-terrorism laws last year.

A total of seven people – mostly acquaintances of the two main suspects – have been arrested since Wednesday’s attack. One source said one of the brothers had been identified by his ID card, left in the getaway car.

Cherif Kouachi served 18 months in prison on a charge of criminal association related to a terrorist enterprise in 2005.

He was part of an Islamist cell enlisting French nationals to travel to Iraq to fight Americans. He was arrested before leaving for Iraq himself.

Charlie Hebdo has published numerous cartoons ridiculing the Prophet Mohammad and Jihadists online repeatedly warned that the magazine would pay for its mockery.

Its lawyer Richard Malka said the newspaper would be published next Wednesday with one million copies compared to its usual print run of 60,000.