The new Citywest self isolation facility will have more than 1,000 beds for those who need to self-isolate. Video: Enda O'Dowd 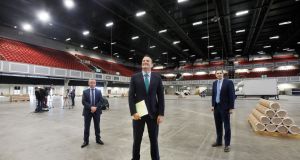 Senior male politicians roaming bedroom corridors in the bowels of Citywest Hotel the morning after another hectic night before, doing their best to avoid human contact for a very complicated set of reasons which may or may not include the involvement of nurses.

What’s unusual about that?

Wouldn’t be the first time.

Citywest, a sprawling hot-air repository off the Naas Road with room for cabinet loads of fragile egos and enough space to accommodate acres of grass roots. A place where political dreams often begin, this hotel/conference centre has been providing a “step up” facility for budding TDs, ambitious deputies and scheming ministers for years.

If only those corridors could talk...

As always, there was a greeting party in place when the Taoiseach arrived late on Wednesday morning. It didn’t feature the usual cast – no local representatives bursting with self-importance or simpering election hopefuls or ministers elbowing for position ahead of the photographic donut.

There was an impressive turn-out of ward bosses. But they were of the medical variety, not constituency hacks.

Instead, the Minister for Health waited with the chief executive of the HSE, a line of uniformed paramedics and a large ambulance. Looking on, a team of worried looking government officials and health care professionals, a handful of journalists and a tall row of Greek goddesses cemented in behind the privet hedge.

The visitors went inside to an interior they didn’t recognise. It didn’t look, sound or smell the way they remembered it

Paul Reid, the CEO, welcomed the Taoiseach outside the main door, remarking on the unusual location.

But that all seems like such a long, long time ago now.

The visitors went inside to an interior they didn’t recognise. It didn’t look, sound or smell the way they remembered it.

Through the small middle bar, past the sanitiser fluid on stands and signs for clinics and the colour-coded directions to different communal areas. No bang of porter or fragrance of carvery lunch adding to the ambiance. No conversation rising from the snugs or contented county councillors subsiding into the soft furnishings. Nobody handing out leaflets or conspiring in sweaty huddles or falling off stools.

The Taoiseach and Minister for Health walked through the unfamiliar familiar public rooms, deep cleaned and devoid of most furniture. Citywest is now a facility for people who need to self-isolate but cannot do this in their own homes. This includes patients who are awaiting test results, those who have tested positive with mild symptoms and people who are in the recovery phase in hospital but can’t self-isolate at home when discharged.

Upstairs from the public areas, they were shown three small clinics housed in a couple of conference rooms and one bedroom.

“We could do without the chandeliers,” laughed one of the nurses. “They’ll want them everywhere now,” replied Harris.

The Taoiseach was put in mind of a classic political sitcom. “Did anyone see that episode of Yes Minister where they have a really efficient hospital because there’s no patients?” he remarked, speaking like a man who used to be a junior hospital doctor.

He was also rubbing his nose and later, when inspecting the nearby conference centre which will house the hospital step-down patients, he took out a paper hankie and blew it.

Whereupon the entire site was immediately evacuated. No. It wasn’t. He’s grand.

The facility, which took in its first patients soon after the VIPs left (14 of them), has been set up and staffed in an astonishingly short amount of time. Meanwhile, the fit-out work is flying. The team running it includes people redeployed from other sections of the health system (the admin workers come from the Central Remedial Clinic) and health professional volunteers who have come out of retirement to answer their country’s call.

The hotel staff are also working hard behind the scenes, but they will not be interacting directly with the patients. It’s a magnificent effort from all concerned.

The Taoiseach carried a folder as he inspected the three zones where different categories of patients will stay, each group separate from the other at all times. It was the welcome pack which residents will be given by nurses when they arrive, along with their colour-coded wristbands.

Where’s the platform? The slogans? The rows of seats and the pumped up delegates?

Nearly a thousand beds are available in the hotel. Across the carpark in the convention centre, more than 400 additional beds can also be pressed into action, although the authorities are hoping they won’t be needed.

“It can effectively be a field hospital if we have overflow from the acute hospitals,” said the Taoiseach. This means that people in recovery can free up valuable acute beds to those more in need.

A number of these step-down and intermediate care facilities are popping up all around the country.

It must have been strange for the two politicians to walk into the main arena in Citywest and see nothing but a vast expanse of floor with crews busy putting together this field hospital.

Where’s the platform? The slogans? The rows of seats and the pumped up delegates?

And when did we ever, in our wildest dreams, envisage a field hospital, an actual field hospital for God’s sake, springing up in Saggart?

“For an organisation which gets a lot of stick like the HSE, you can have nothing but admiration for what they are doing – the time, effort and dedication put in by everyone pulling together has been amazing,” said Harris after the visit. “Within the space of a week they’ve managed to set up the most sophisticated operation ever.”

As for Citywest. Ardfheiseanna will never be the same again.