What happened to the goal of 15,000 tests a day and other testing questions 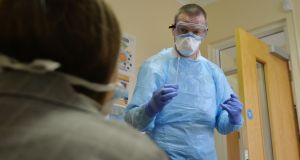 How many tests have we done, and how many are we doing?

In terms of laboratory tests, which produce a positive or negative result on a sample, we have done just over 30,000, with a positive rate in the current tests of about 15 per cent. About 14 labs are producing just over 1,500 test results a day.

That figure refers to swabs, or samples, collected, rather than test results. And the current level seems to be lower than 5,000, between 2,000 and 3,000 a day.

Why have sampling centres been closed?

Mostly it was due to a shortage of swabbing kits, although the HSE said on Tuesday centres were open “as needed” and that it has a “plentiful supply of swabbing kits”. It said patients being referred for swabbing can easily be processed by existing testing centres.

However, 2,000-3,000 swabs from 46 testing centres would indicate they still are not running at full clip, possibly to avoid overloading the labs and creating a backlog between those two parts of the system.

How could labs be overloaded?

They are struggling for vital supplies, including something called reagent. A reagent is a chemical ingredient needed to show the presence of the virus. Everyone in the world wants these ingredients, so there’s a significant shortfall. This is why we’re only producing 1,500 test results a day.

That is still the goal, but without significant new supplies of reagent, it is hard to see how this can be achieved. The pharmaceutical industry here has suggested it might be able to step up and provide supplies, which could be a significant development.

Why does this all matter?

Ireland’s strategy has been to “test, test, test”. If we are not doing much testing, it’s not very credible to claim that is still our approach. Also, a strong testing system will be important in the future when we try to go back to normal. Quick and efficient testing means you can identify and react to new clusters and move to control them. It can facilitate going back to something like normal.

Does all this matter to me if I develop symptoms?

Usually, no. If you’re sick, you’re advised to stay at home for 14 days and self-isolate until you’re five days fever-free. If you become sicker, call your GP or in an emergency, 999. Your Covid-19 test status – whether you have had one or not, or whether it’s positive or negative – doesn’t determine your access to medical care, your symptoms do.

What makes me eligible for a test?

There’s been another change to the criteria, as of Tuesday night. Whereas previously you needed to have two symptoms and be in a vulnerable group, now those who are in close contact with a confirmed or probable case and who begin to display symptoms no longer have to display two symptoms in order to go forward for testing.

The number of eligible groups has increased, and some chronic conditions such as obesity have been added. People in nursing homes, direct provision and specialist Traveller or Roma accommodation are also considered to be vulnerable.

“What it is going to do is allow us to do more targeted testing and identify areas where there’s a potential for an outbreak, like nursing homes, so we can go in and stop the virus spreading,” according to Dr Nuala O’Connor, lead adviser on Covid-19 with the Irish College of General Practitioners.

“If they have someone in their household who is in a vulnerable group and starts to feel unwell with any cough, fever or shortness of breath then we need them to contact their GP to see if they need to be tested.”

The main things to remember are to self-isolate if you feel sick. Your close contacts should reduce their movements in this case, and monitor closely any vulnerable people you live with. Contact your GP, who will determine if you’re eligible for a test, and arrange one if needed.