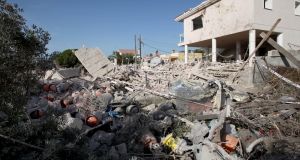 It is still unclear who lived in the two-storey foreclosed house in the small Montecarlo neighbourhood. Photograph: Jaume Sellart/EPA

It looks like the site of an earthquake - a heap of rubble and tangled wreckage that marks the spot where a two-storey home was destroyed by a massive gas explosion just before midnight on Wednesday.

Spanish police said they initially thought the blast in the small coastal town of Alcanar, which killed at least one person and injured seven, was connected to a clandestine drugs laboratory.

Now they are linking it to the deadly attack that took place less than 24 hours later, when a white van swerved at speed down Barcelona’s most famous boulevard and mowed down people at random, killing 13.

Josep Lluis Trapero, police chief for the region of Catalonia, said on Friday that investigators believed the authors of the van attack had originally planned to trigger a bomb using gas canisters, of which about 20 were discovered in the ruins of the collapsed building.

The people there were ‘manipulating’ the propane and butane canisters at the time of the accidental explosion, he said.

This had forced the conspirators to scale down their plans and to hurriedly carry out more “rudimentary” attacks in Barcelona and the resort of Cambrils, where a group of men drove a car at pedestrians and police before being shot dead. A Spanish woman was killed in the Cambrils incident.

“The Alcanar blast triggered the attacks...It’s not what they had in mind initially,” Mr Trapero said.

“Our hypothesis is that an attack was being prepared for some time from this Alcanar house,” he added. “The blast has prevented a larger bombing from happening.”

It is still unclear who lived in the two-storey foreclosed house in the small Montecarlo neighbourhood, a rundown area between a cement factory and the sea. After thriving during Spain’s boom years before the financial crash, it is now occupied mostly in summer, by just a handful of tourists and locals.

Neighbours told Reuters the place had been illegally occupied for months but nobody had ever seen any of those who lived there.

“A friend of mine owns the house on the other side of the street but we’ve never seen anything,” said Marc Esteban Carmona, a 22-year-old university student.

“Initially we were joking about it. OK, a drug laboratory exploded, but that’s it. But now I’m a bit more freaked out.”

At least two men were in the house when it was wiped out by the blast on Wednesday night and at least one was killed by the explosion, the police said. They said they found biological traces that could be from a second body, though it was too early to confirm.

A man who survived the blast is now under arrest in the city of Tortosa after being treated for his injuries at the local hospital. His identity was not revealed.

According to local emergency services, the seven injured people were four French, an Italian, a Moroccan and a Spaniard.

Nuria Gil, a 50-year-old entrepreneur who lives in Montecarlo all year long, said she was aware the house had been occupied for several months but was not sure whether it was by the same people or by different groups.

“I never bumped into anybody (...) It’s a very quiet area. I thought I lived in paradise,” she said.