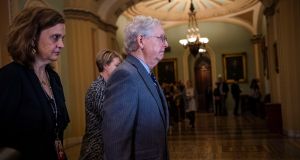 With almost every Republican in the audience holding fast behind US president Donald Trump, House impeachment managers made impassioned closing arguments before the Senate on Monday, urging it to hold the president to account.

Led by intelligence committee chairman Adam Schiff, the managers pleaded with Republicans to find Mr Trump guilty of the charges in the two articles of impeachment: abuse of power and obstruction of Congress.

“Your duty demands that you convict President Trump,” said Jason Crow of Colorado, urging Republicans to stop pretending Mr Trump was motivated in his Ukraine scheme by concerns about corruption or that manoeuvres in the scheme such as the suspension of military aid were in fact innocent measures undertaken for other purposes.

“How many falsehoods can we take?” Mr Crow asked. “When will it be one too many?”

But a mostly party-line vote on Friday not to call witnesses in the trial signalled a lack of interest on the Republican side.

Mr Trump maintains that his conduct has been irreproachable, and all but a handful of the 53 senators in the majority have seamlessly agreed.

“This is an effort to overturn the results of one election and to try to interfere in the coming election that begins today in Iowa, ” White House counsel Pat Cipollone, who is leading Mr Trump’s impeachment defence, told the chamber.

“The only appropriate result here is to acquit the president and to leave it to the voters to choose their president.”

The closing arguments set the stage for a vote to acquit Mr Trump on Wednesday afternoon. The senators will hold separate votes on each article of impeachment, with an out-of-reach two-thirds majority needed to convict Mr Trump and remove him from office.

With unusual rules requiring senators to maintain silence in the trial to this point – apart from what they might tell the media off the Senate floor – the members of the upper chamber will finally have a chance to make speeches about the charges against Mr Trump, starting on Tuesday morning, when the trial adjourns temporarily for regular Senate business.

Chief justice John Roberts, who has presided at the trial, made another trip across the street from the supreme court to the Capitol on Monday morning. He was scheduled to return for the acquittal vote on Wednesday afternoon.

Mr Roberts may also visit the Capitol on Tuesday evening, when Mr Trump is scheduled to deliver his state of the union address.

The president’s impeachment centres on a pressure campaign led by his personal lawyer, Rudy Giuliani, in Ukraine for an investigation to be opened into Mr Trump’s political rival Joe Biden, and his son Hunter, who worked for a Ukrainian gas company while Mr Biden was US vice-president.

In a phone call between Mr Trump and Ukrainian president Volodymyr Zelenskiy last July, the US president asked for a “favour” involving an investigation of the Bidens. Mr Trump had frozen US military aid to Ukraine at the time. – Guardian/Agencies