Holidaymakers warned as Spain, Portugal at risk of extreme heat 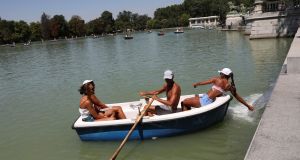 A woman tries to cool off with water at the Retiro park, in Madrid, Spain. Photograph: Susana Vera/Reuters

Temperatures may break records across Europe in the coming week, with weather warnings currently in place across much of Spain and Portugal.

Although holidaymakers might normally expect heat in the mid-30s in these countries at this time of year, there is currently the potential for extreme temperatures – edging towards 50 degrees Celsius.

Saturday is forecast to be Europe’s hottest day of the week and the UK Met Office has said that conditions on the Iberian peninsula “could beat the all-time continental European record of 48 degrees”, with unusually high temperatures likely to extend into southwest France. According to the Met Office data, the existing temperature record was set in Athens on July 10th, 1977.

This particular heatwave is due to “a plume of very dry, hot air from Africa”, according to Met Office forecaster Sophie Yeomans, with much of Europe being hotter than usual for the time of year.

According to Met Office data, the record for Spain is 47.3 degrees, recorded on July 13th, 2017, in Montoro, east of Cordoba, and for Portugal it is 47.4 degrees on August 1st, 2003, in Amareleja, in the south-central Beja district.

“There’s an outside chance of hitting 50 degrees,” said Yeomans. “If somewhere gets the right conditions, it could do [it] but that’s a very low likelihood.”

The Spanish meteorology agency, Aemet, has issued an official warning of extreme temperatures, mainly for inland areas, which it predicts will exceed 45 degrees. Much of the rest of the country, including the Cantabrian and Catalan coasts, are likely to see unusually high temperatures above 35 degrees.

At this stage, it is thought that the eastern coast of Andalusia, the Canary Islands, and Ceuta and Melilla in North Africa, will stay around the average for the time of year.

The Met Office’s advice for the heat is to find shade in the midday hours and regularly apply high-factor sunscreen. Anyone who particularly suffers with the heat should avoid inland areas and head to the coast, where conditions are fresher, with a cooler onshore breeze.

“The temperatures we are currently experiencing may not yet be the ‘new normal’, but within a few decades they could be,” Met Office chief scientist Stephen Belcher said in a recent blog. – Guardian