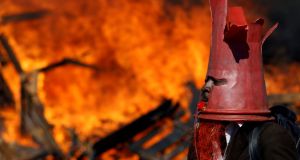 A supporter of the opposition Movement for Democratic Change party wears a cone as they block a street in Harare, Zimbabwe. Photograph: Siphiwe Sibeko/Reuters 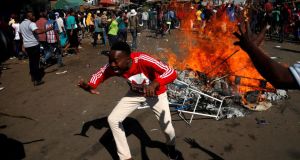 Supporters of the opposition Movement for Democratic Change party of Nelson Chamisa on a street in Harare, Zimbabwe on Wednesday. Photograph: Siphiwe Sibeko/Reuters

Police said three people had been killed in the unrest in Harare, according to state broadcaster ZBC. One person was shot dead near a bus rank, according to a Reuters witness. Several more were reportedly seriously injured.

The army was deployed in the capital after police proved unable to quell demonstrators who claimed Monday’s election was being rigged.

By mid-afternoon much of the city centre resembled a war zone, with military helicopters flying overhead, armoured personnel carriers moving through burning debris and patrols of soldiers chasing stone-throwers down narrow streets.

Terrified commuters took cover in shop doorways as volleys of shots rang out and stones flew through the air.

Opposition supporters have expressed growing impatience over delays in releasing the results of the historic vote, the first since Robert Mugabe was ousted after four decades in charge.

Early clashes took place outside the headquarters of the Zimbabwe Electoral Commission (ZEC), which opposition supporters accuse of bias, and spread rapidly.

“We support [opposition leader Nelson] Chamisa and we want him to be our president. The electoral commission is not fair. Our election is being stolen,” said a 19-year-old student among the protesters.

Some chanted “this is war”, and others shouted slogans calling for the country’s president, Emmerson Mnangagwa, to step down.

“This is all the government’s fault,” said Abigail Nganlo, a 29-year-old nurse, as she sheltered from the clashes in a narrow alley. “We are on our knees with the economic situation. People are so angry. The [election] figures they are producing are fake. Where there are 500 people at a polling station, they are saying 5,000.”

Alex Kamasa (30), an unemployed graduate, said: “They are desperate. They have rigged the election. It is a big robbery.”

THANK YOU ZIMBABWE ...I’m humbled by the support you have given to me as a Presidential Candidate. We have won the popular vote. You voted for total Change in this past election!We have won this one together. No amount of results manipulation will alter your WILL #Godisinit

At this crucial time, I call on everyone to desist from provocative declarations and statements. We must all demonstrate patience and maturity, and act in a way that puts our people and their safety first. Now is the time for responsibility and above all, peace

Security forces were also deployed in Bulawayo, Zimbabwe’s southern second city, which like Harare is an opposition stronghold.

The country’s justice minister, Ziyambi Ziyambi, said the army had been deployed to disperse a violent crowd and restore “peace and tranquility”.

“The presence of the army is not to intimidate people but to ensure that law and order is maintained. They are there to assist the police,” Ziyambi said in an interview broadcast on eNCA television.

“They are there as a people’s army to ensure that peace and security prevails.”

The authorities are under increasing pressure to release the results of the poll, which pitted Nelson Chamisa, a 40-year-old lawyer, pastor and leader of the main opposition party the Movement for Democratic Change (MDC), against Mnangagwa (75), a longtime Mugabe aide and head of the ruling Zanu-PF.

Chamisa said on Twitter on Wednesday he had won the “popular vote” in the election.

Election monitors called on Wednesday morning for votes to be counted in an open and timely way. Zanu-PF has already won a majority of seats in parliament after sweeping rural constituencies by significant margins, official results show.

The parliamentary outcome does not necessarily indicate voters’ choice of president. Under electoral law the result in the presidential vote has to be announced by August 4th.

Elmar Brok, the head of the first EU monitors to be allowed into Zimbabwe for 16 years, praised an “opening up of political space” but said the government had failed to ensure a level playing field and accused the ZEC of bias.

Brok called on the ZEC to make detailed results public to ensure the credibility of the election, given earlier shortcomings. Other monitors also expressed concerns as the count went into a third day.

“Election day is only a snapshot of a long electoral process,” said the US congresswoman Karen Bass, one of the monitors deployed jointly by the US International Republican Institute and National Democratic Institute.

“It is vital to see the electoral process to its conclusion, and it is still too early to make an assessment on the nature of these elections.”

The latest results announced by the ZEC showed Zanu-PF had won a two-thirds majority in the 210-seat lower house, which would allow it to change the constitution at will.

Chamisa said in a tweet on Wednesday morning that the ZEC “seeks to release results to buy time & reverse the people’s presidential election victory”.

If no candidate wins more than half of the votes in the presidential election, there will be a runoff in five weeks.

The two presidential candidates represent dramatically different ideologies and political styles, as well as generations. Pre-election opinion polls gave Mnangagwa, a dour former spy chief known as “the Crocodile” due to his reputation for ruthless cunning, a slim lead over Chamisa, a brilliant if sometimes wayward orator.

Support for Zanu-PF has historically been deepest in rural areas, particularly the party’s Mashonaland heartland, where more than two-thirds of Zimbabwe’s 17 million people live.

The campaign has been free of the systematic violence that marred previous polls, but the MDC has repeatedly claimed it was hindered by a flawed electoral roll, ballot paper malpractice, voter intimidation and handouts to voters from the ruling party. Many of its complaints have now been backed by monitors.

Zimbabwe’s rulers know, however, that a fraudulent election would block the country’s reintegration into the international community and deny it the huge bailout package needed to avoid economic meltdown.

Almost four decades of rule by Mugabe has left Zimbabwe with a shattered economy, soaring unemployment and crumbling infrastructure.

Supporters said the president had won “a landslide victory”.