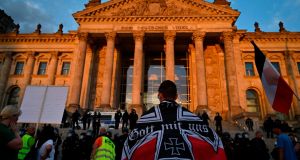 A protester stands wrapped in black-white-red imperial German flag in front of the Reichstag building guarded by policemen at the end of the demonstration in Berlin. Photograph: John Macdougall/AFP via Getty Images

Berlin police were guarding the Reichstag on Saturday evening after a mob attempted to storm the parliament building at the end of a day of protest against Covid-19 restrictions.

Around 8pm, a group of people broke through protective barriers and raced up the main steps before the building. Police in riot gear held them back just before they reached the glass entrance doors and used pepper spray on them.

“In pushing them back we had to use force,” said the police in a statement, adding that the spontaneous demonstration before the building was broken up around 9pm.

It was the dramatic end to a long day in Berlin when an estimated 38,000 people held a largely peaceful protest against Covid-19 pandemic restrictions, dubbed a “crisis of convenience” by a nephew of John F Kennedy.

Hours after a court overturned a ban on the gathering, the march through the city centre was stopped shortly after it began as marchers refused to wear masks or distance.

A separate gathering went ahead nearby at the Victory Column in the Tiergarten park. From a stage there, Robert F Kennedy, a US vaccination sceptic, praised the cheering crowd for pushing back against what he called efforts to spread fear in the pandemic and impose a new surveillance state.

Half a century after his uncle visited Berlin, then a cold war frontier against totalitarianism, Mr Kennedy delighted the crowd by repeating his uncle’s most famous slogan, but in a very different context.

“Today Berlin is once again a front against totalitarianism,” he said to huge cheers. “And that is why I’m proud to say, ‘Ich bin ein Berliner’.”

The gathering in the park attracted many more people than the 20,000 expected by its organiser, the Querdenken 711 group, and a 2km stretch from the Brandenburg Gate to the Victory Column was filled with people.

Querdenken founder Michael Ballweg, a Stuttgart businessman, urged the crowd – some clustered together tightly, others spaced out in the park and none wearing masks – to be watchful of extremists intent on violence.

“We demand the lifting of all restrictive measures introduced and the resignation of the entire federal government,” he said, prompting a 40-second surge of applause from the crowd.

“We are democrats. Right- and left-wing extremism and fascist thought have no place in this movement. We ignore all attempts to pigeon-hole us as left or right.”

People of all ages made the trip to Berlin, from Munich pensioners to Frankfurt engineers. Among the rainbow peace flags and Israel flags were hundreds of home-made banners with messages ranging from “Health not Pharma Profit” and “Corona is a Declaration of War by the Elite against the Majority”.

Noticeable numbers of neo-Nazis, kitted out with historic Reich flags and other extremist accessories, mixed in with the crowd.

Most demonstrators approached by The Irish Times expressed various concerns about the future of civil liberties in the pandemic. “We’re really worried that people are allowing themselves to be scared and manipulated and our basic rights eroded,” said Svenja, a 22-year-old student from Nuremberg.

Some 3,000 police were deployed to manage the event, banned by Berlin’s state government but permitted after a court intervention.

By late Saturday afternoon, a police spokesman said the event had been largely peaceful, though there had been isolated scuffles. “We had to intervene in front of the Russian embassy where a bottle and stones flew at two officers,” said spokesman Thilo Cablitz.

“Two people were taken into custody and, amid scuffles, pepper spray had to be used.” Further down Unter den Linden boulevard, a counter-demonstration to the Querdenken march attracted a few hundred participants.

As the main demonstration was winding down, a small group of extremists waving historic Reich flags held an unofficial gathering at the Reichstag.

One of the speakers at the gathering was Attila Hildmann, a vegan cookbook author who has become a leading conspiracy theorist in the pandemic. He was later arrested by police in the scuffle outside the Russian embassy.