Global climate protest may propel Vienna away from populist-conservative coalition 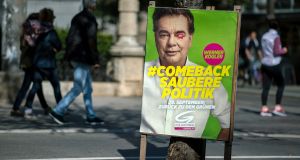 When 6.4 million Austrians go to the polls on Sunday in a snap general election, they have a choice between more of the same – a coalition of conservatives and far-right populists – or something different.

After polls close at 5pm on Sunday, ex-chancellor Sebastian Kurz – whose conservative People’s Party (ÖVP) is leading in the polls at 34 per cent – could reactivate his last alliance, the extremist Freedom Party (FPÖ).

But with prosecutors investigating the ex-FPÖ leader, and rumours of more revelations to come, Kurz may yet pivot away from his populist former allies.

That’s where the Green Party comes in. At a final rally in Vienna’s Sigmund Freud park, Austrian Greens were quietly confident the growing global climate protest would catalyse a voter shift in their direction on Sunday.

Their dreams of returning to parliament – and perhaps even power – were triggered by a secret video last May showing the then FPÖ leader promising state contracts for party donations. That collapsed the populist leader’s 18-month coalition with the conservatives.

Austrian Greens are impatient to get back into parliament, and open to the idea of entering government for the first time, but wary of selling out cheaply to Kurz.

In the election campaign, riding the Greta wave, the Green Party has pushed an eco-social tax reform that balances green goals with social justice: it rewards environmentally friendly behaviour and lower-income families, for instance, while hitting wealthier SUV drivers.

“We’re open for talks with Kurz but his party has a long way to go to be a coalition partner for us,” said Werner Kogler, Green Party leader, on Friday. As well as climate goals, he wants the ÖVP leader to retreat from the anti-immigrant and Islamophobic rhetoric he lifted from the FPÖ in recent years. “The ÖVP would have to bring back the Christian, social and human dignity elements of their politics they’ve dumped in power with the populists.”

Though absent at federal level since 2017, the Greens want to repeat at national level policies they have implemented in government in Vienna: backing investment in public transport and social housing in two-thirds of all new units built.

Alongside the Greens, Kurz would need a third coalition partner. The liberal Neos are closer to the Kurz ÖVP in economic policy but echo the Greens on anti-corruption legislation to clean up Austrian politics.

While Kurz has floated heading an untested minority government, a final option is a return to the grand coalition model with Austria’s Social Democrats (SPÖ) that dominated post-war politics.

The SPÖ has struggled in opposition since 2017, its voter base peeled away by the far-right FPÖ and the Greens.

Final polls show the party on just 22 per cent support which, if repeated on Sunday, would be a historic disaster.

In Vienna on Friday, senior officials say they are braced for the worst on Sunday. They blame an inexperienced leader, infighting, identity crises and poor communication with voters, particularly on the dominant migration-integration theme.

In a last campaign push on Friday afternoon, party chief Pamela Rendi-Wagner marched through the city centre before an energetic crowd of supporters cheering “Pam! Pam!”

For Rendi-Wagner, a 48-year-old doctor and leader for just 10 months, the FPÖ’s scandals are a political “low point” in the second republic. But her advisers concede she has struggled to convert rivals’ scandal into SPÖ support.

In the campaign, the SPÖ leader has promised to defend social housing, introduce climate-friendly transport and a €1,700 tax-free minimum wage.

“If you are a decent person who wants decent, clean politics that takes care of you, for whom workers’ rights are not immaterial . . . I invite to vote SPÖ,” Rendi-Wagner told a cheering crowd.

Supporters marching through Vienna on Friday afternoon are still hoping for a last-minute miracle and a new left-wing government for Austria.

“I grew up on social democracy, it’s done so much for ordinary Austrians, but many have forgotten that,” said Petra Hajek, head-to-toe in SPÖ red and a Star of David chain.

“My mother fled the Nazis in the child transports and, if the old government is returned on Sunday with its fascist tendencies and language, I really fear for Austria’s future.”