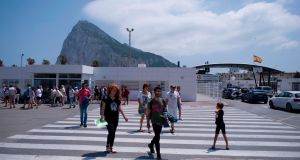 The border of Gibraltar. Gibraltar has denounced the king of Spain as ‘undemocratic’ for comments in a speech. File photograph: Jorge Guerrero/AFP/Getty Images

Gibraltar has denounced the king of Spain as “undemocratic” for saying the “two governments” of his country and Britain will find a solution on the Rock’s future that is “acceptable to all involved”.

The chief minister of Gibraltar, Fabian Picardo, said King Felipe’s comments suggested he was treating the British territory as one that could be “traded from one monarch to another” like a “pawn in a chess game”.

Mr Picardo urged the king to understand that Gibraltar “will remain 100 per cent British”, after the monarch raised the thorny issue of the territory as he addressed MPs and peers in Westminster during his state visit to the UK.

In the address, King Felipe said the UK and Spain had a long shared history and had “frequently stood shoulder to shoulder” as friends, partners and allies.

Watched by prime minister Theresa May and Labour leader Jeremy Corbyn, the king went on: “It is just as true, however, that during our rich and fruitful history there have also been estrangements, rivalries and disputes, but the work and determination of our governments, authorities and citizens have relegated such events to the past.

“I am certain that this resolve to overcome our differences will be even greater in the case of Gibraltar and I am confident that, through the necessary dialogue and effort, our two governments will be able to work towards arrangements that are acceptable to all involved.”

But the Gibraltar government insisted that its voice was the most important when it came to the future of the British territory and criticised King Felipe’s “undemocratic” ignorance of the wishes of its people.

Mr Picardo said: “The people of Gibraltar want normal, friendly relations with Spain on the same basis as with any other country.

“However, we have no desire to form part of Spain or to come under Spanish sovereignty in any shape or form.

“In the times in which we live, territories cannot be traded from one monarch to another like pawns in a chess game.

“The concept of human rights and democracy means that the wishes of people must come first, as much of his majesty the king of Spain’s address to Westminster Hall rightly identified.

“But those principles are not just abstract ones; they apply to Gibraltar and its people too.”

Referencing two referenda held in 1967 and 2002 in which the people of Gibraltar voted to remain British, Mr Picardo added: “In Gibraltar, the people have spoken loud and clear. Our freely-expressed democratic wishes must be respected and that means understanding Gibraltar will remain 100 per cent British.”