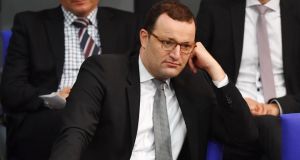 The 37-year-old deputy finance minister is Germany’s answer to Leo Varadkar: defined by conservative politics, unashamed ambition and, to a lesser extent, his homosexuality.

Friday’s vote was the end of a long debate for Germany and the start of another chapter for the politician from a Catholic town of 3,700 near the Dutch border. “I remember how it was there when I was 15,” he said, “but in the last 20 years I’ve seen a new openness and calmness develop, where people dared to say who they really were.”

Spahn credits the Irish marriage equality vote in 2015 for pushing Germany to pull up level this week – opening new career possibilities for politicians such as himself and Varadkar. “I know Leo . . . and I can only wish him all the best,” he said in an interview with The Irish Times. “What’s happened in Ireland is a great sign.”

First elected to the Bundestag in 2002, Spahn shot to fame in 2014 by snatching a vacant seat on the board of the ruling Christian Democratic Union (CDU) from the chosen candidate of party leader Angela Merkel.

Unusually for a rebel against Merkel, Spahn lived to tell the tale. Since then he has occupied a gap in the German political landscape as a leading conservative voice in the centrist Merkel CDU.

He backs a burka ban, warns against open-door migration and, as deputy and protégé to finance minister Wolfgang Schäuble, is wary of EU reform promises awakened by the election of the new French president.

“We need to solve problems that concern the man on the street: border security, migration, economic growth,” he said. “The 10 million Le Pen voters disappointed by Europe won’t be convinced by a euro finance minister.”

He is dismissive of euro sovereign debt bonds, at least in the immediate future, repeating the Berlin refrain that the euro zone is suffering a lack of growth and reform ambition – not debt.

“If euro finance ministers ensure stricter adherence to euro rules, and reduce risks like non-performing loans, then we are on board,” he said. “Only in the next step can we talk about shared risk.”

Though Germany posted its fifth surplus budget in a row this week, Spahn has mixed feelings about the continued run of steady growth and record employment.

“The danger is we become indolent, enjoy the moment too much instead of finding the energy to ensure we’ll still be doing well in 10 years,” said Spahn. “We are the second-oldest country in the world after Japan and still have to answer big questions: will we remain an industrial country, will we manage the digital transition?”

Ahead of the G20 meeting next Friday and Saturday in Hamburg, Spahn is optimistic that leaders can overcome tensions with US president Donald Trump and agree convincing proposals to address the shared problem of low growth. “We have to do this with the Americans and we’ve already made a start,” he said.

On Brexit Spahn is hopeful a solution can be found that works for all, and says he shares the determination for the Irish Border to remain open. “We’re not a mafia or cult, if someone wants to go I don’t think you should put the boot in,” he said. “But anyone who wants to ‘take back control’ and have full sovereignty wants nothing to do with anyone.”

But as Helmut Kohl, Germany’s unity chancellor and ex-CDU leader, is laid to rest today, Spahn is pensive about the European project. He says he doesn’t agree with the once sacred mantra of ever-closer union and says fresh thinking is needed from his generation amid growing European expectations of German EU leadership.

“Around 30 years after German unification we’re slipping into a new situation, somewhat reluctantly,” he said. “We cannot duck out of sight, we have responsibility for the whole thing, something we still have to learn sometimes.”