Schulz under fire for attack on ‘arrogant’ Merkel 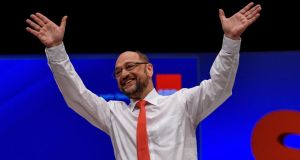 “The SPD knows that people don’t want the state in their face, but at their side when needed,” he said. “The SPD stands for a politics that secures solidarity in times of change, for secure pensions, better education and fairer wages.”

By Monday morning Schulz had set German airwaves a-buzz: but not, as he had hoped, with talk of the SPD’s political offensive on the three-term chancellor.

Instead the talk was of an SPD leader on the defensive. In January Schulz’s arrival as Merkel challenger prompted a remarkable spike in party support but, five months on, that euphoria is a distant memory.

And three months to polling day, after a series of state election disasters, the SPD is once again 15 points behind Merkel and her Christian Democratic Union (CDU).

Schulz directed his attack at Merkel’s political style, which he said favoured short-term tactics over long-term strategy, and her party’s embrace of “asymmetric demobilisation”. This, he said, involved content-free campaigns personalised around the popular German leader that demotivated other parties’ supporters from even turning out to vote.

“We all have to be clear what it means when the ruling party’s headquarters decides to systematically avoid a debate about our country’s future,” said Schulz. “Pursuing a strategy of driving lower electoral participation . . . is what I call an attack on democracy.”

Merkel’s CDU allies were out early on Monday morning, variously condemning Schulz’s attack on Merkel as brutish, outdated and a sign of “huge helplessness” over his party’s election prospects.

They brushed off the “demobilisation” criticism as outdated: this week the party will present a very different campaign to get out the vote, officials say, after they noticed a link between greater turnout in recent state polls and lower support for the right-wing populist Alternative für Deutschland. The SPD party programme is a solid centre-left affair, promising €15 billion in tax cuts for low earners; greater spending on security and infrastructure; additional financial support for families; marriage equality; tighter hire-and-fire rules and additional jobless training.

At European Union level the SPD wants greater infrastructure spending, tighter rules on corporate tax and a European army. The programme emerged from a lengthy rank-and-file consultation process and received unanimous backing at the party conference.

But delegate applause for Schulz was a long way from the rock-star welcome at Glastonbury for Jeremy Corbyn and his hard-left Labour alternative. By contrast German trade union and potential coalition partners have accused the SPD of lacking the courage to do a Corbyn and try something new.

“This programme prostrates itself even more before business lobby and super-rich interests than previous programmes,” said Sahra Wagenknecht of the Left Party, pointing to the party’s refusal to back a wealth tax proposal. “An SPD doesn’t do anything fundamentally different to the CDU: that’s no use to anyone.”

Leading Green Party figures were similarly unforgiving, with senior MP Konstantin von Notz tweeting: “If Merkel’s politics are really an ‘attack on democracy’, then the SPD participated for eight of the last 12 years.”

Political scientist Ulrich von Alemann suggested the conference and programme exposed “just how difficult it is for the SPD to position itself intelligently and clearly against the CDU”.

On Tuesday morning before Berlin journalists, Schulz will be pressed on the unresolved dilemmas of the looming 90-day campaign. In particular: why should voters choose him as a centrist chancellor when that position is already filled?

“It would be nice to find out eventually what the SPD wants to do fundamentally different to Merkel,” commented the left-wing Tageszeitung daily on Monday. For now, the SPD’s third attempt to topple Merkel continued a long-running search for a “chink in her Teflon coating”.

Back in Dortmund, Gerhard Schröder, Germany’s last living ex-chancellor, urged SPD delegates to ignore polls and recalled how he closed a similar 15-point with Merkel’s CDU in the last weeks of the 2005 campaign.

“Into battle!” he shouted, adding the Chilean political cry: “Venceremos!” – we will be victorious. What Schröder forgot to mention: in 2005 he finished second and lost power.