The White House offered to have a US tabloid kill a damaging story about the hosts of a cable news show if they personally apologised to the president, according to the two journalists. Video: MSNBC 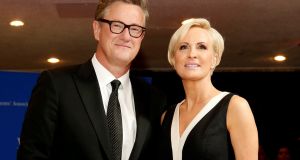 MSNBC presensters Joe Scarborough and Mika Brzezinski, who have been personally attacked by US president Donald Trump. Photograph: Jonathan Ernst/Reuters

The White House offered to have a US tabloid kill a damaging story about the hosts of a cable news show if they personally apologised to the president, according to the two journalists who have become the latest target of Donald Trump’s attacks on the media.

The claim, which Mr Trump dismissed as “fake news”, came a day after the president assailed Mika Brzezinski and Joe Scarborough, the hosts of MSNBC’s Morning Joe, in a pair of crude and personal tweets that drew condemnation from Republican lawmakers and rekindled concerns over his temperament and treatment of women.

Ms Brzezinski and Mr Scarborough responded to Mr Trump in an op-ed in the Washington Post on Friday titled “Donald Trump is not well”. They wrote: “This year, top White House staff members warned that the National Enquirer was planning to publish a negative article about us unless we begged the president to have the story spiked. We ignored their desperate pleas.”

The pair, who are engaged, gave more detail during their show on Friday morning. “They said, if you call the president up and you apologise for your coverage, then he will pick up the phone and basically spike the story. I had, I will just say, three people at the very top of the administration calling me,” Mr Scarborough said “The calls kept coming. And kept coming.”

Ms Brzezinski said the National Enquirer had been calling her children and her close friends about a story they were planning to run, and the White House “said, oh, this could go away”.

Dylan Howard, chief content officer at American Media, which owns the tabloid, said the National Enquirer had “accurately reported a story” about the two journalists but denied any knowledge of their claims about the White House.

“At no time did we threaten either Joe or Mika or their children in connection with our reporting on the story. We have no knowledge of any discussions between the White House and Joe and Mika about our story, and absolutely no involvement in those discussions,” he said in a statement.

Watched low rated @Morning_Joe for first time in long time. FAKE NEWS. He called me to stop a National Enquirer article. I said no! Bad show

Why do you keep lying about things that are so easily disproven? What is wrong with you? https://t.co/aAoUj5HYZS

Mr Trump is a long-time friend of David Pecker, American Media’s chief executive and publisher of the National Enquirer, a fixture of supermarket checkout lines known for salacious and often far-fetched coverage of celebrities and politicians.

The paper broke the story that John Edwards, a Democratic presidential candidate in 2008, had a baby with his mistress during his campaign. During the 2016 campaign, the tabloid attacked candidates including Ted Cruz and Hillary Clinton but remained supportive of Mr Trump, even running opinion pieces by him.

A recent profile of Mr Pecker in the New Yorker detailed the National Enquirer’s support for Mr Trump and the publisher’s candour about using his media outlets to help his friends. “The guy’s a personal friend of mine,” Mr Pecker told the magazine.

The accusation from Ms Brzezinski and Mr Scarborough set off another round of combat with the president. Mr Trump tweeted during Friday morning’s broadcast, “Watched low rated @Morning_Joe for first time in long time. FAKE NEWS. He called me to stop a National Enquirer article. I said no! Bad show”.

Mr Scarborough shot back on Twitter, “Yet another lie. I have texts from your top aides and phone records. Also, those records show I haven’t spoken with you in many months.” He added: “Why do you keep lying about things that are so easily disproven? What is wrong with you?”

In other Trump presidency developments on Friday:

– A scaled-back version of Mr Trump’s controversial travel ban was in force for its first full day, having been implemented on Thursday evening, US easterntime. The new rules are not so much an outright ban as a tightening of already-tough visa policies affecting citizens from six Muslim-majority countries as well as all refugees.

Under the temporary rules, citizens of Syria, Sudan, Somalia, Libya, Iran and Yemen who already have visas will be allowed into the United States. But people from those countries who want new visas will now have to prove a close family relationship or an existing relationship with an entity such as a school or business in the US.

The American Civil Liberties Union called the new criteria “extremely restrictive”, arbitrary in their exclusions and designed to “disparage and condemn Muslims”. The state of Hawaii filed an emergency motion on Thursday asking a federal judge to clarify that the administration cannot enforce the ban against relatives – such as grandparents, aunts or uncles – not included in the State Department’s definition of “bona fide” personal relationships.

– Mr Trump called for a determined response to North Korea after talks with South Korean president Moon Jae-in at which he emphasised the importance of their alliance but took aim at Seoul over trade and sharing the cost of defence. Mr Trump said the United States was renegotiating what he characterised as a “rough” trade deal with South Korea agreed five years ago by his predecessor, Barack Obama, and reiterated that an era of “strategic patience” over North Korea’s nuclear and ballistic missile programs had ended.