A week of bombings in the birthplace of Boko Haram 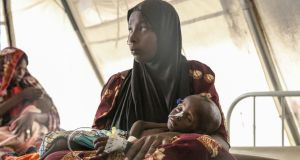 A woman cradles her daughter at an MSF clinic for malnourished children in Gwange, Maiduguri, northeast Nigeria. Photograph: Sally Hayden

It was about 10.30pm when the first explosion sounded. Across Maiduguri, capital of northeast Nigeria’s Borno State, residents strained to hear another boom. “There’s always a second one,” one aid worker commented, looking into the sky expectantly.

Half an hour later, it happened. A second detonation, and then a series of others, some coming from different directions to the first two, the occasional gunshot penetrating the darkness in the aftermath.

This was Sunday, the night of the Eid al-Fitr celebrations marking the conclusion of the Muslim holy month of Ramadan, in the city that gave birth to Boko Haram – one of the deadliest terrorist groups in the world.

A hot, dusty metropolis of about two million, Maiduguri was on high alert as the end of Ramadan approached, with security making concerted attempts to prevent the fasting period ending in tragedy.

Before morning prayers on Sunday the military banned vehicles on the roads, pulling over cars and taxis as well as the yellow Keke Napep tricycles popular with locals. Even wandering animals were taken off the road.

Muslims dressed in new clothes walked to Eid prayers, greeting Christians heading to church on their way. “The good part of the insurgency is that it’s brought the Christian and Muslim communities together,” one resident told me. “We’re all united against the same enemy.”

This week has seen at least 13 bombings in Maiduguri or the surrounding neighbourhoods. On Sunday night alone, seven bombs went off, killing 16, including the attackers.

This is the latest stage in the conflict carried on by Boko Haram, which has seen it move from military-style assaults to guerrilla tactics.

In December, Nigerian president Muhammadu Buhari said Boko Haram’s only remaining camp, in the Sambisa Forest, had been captured, calling it the group’s “final crushing”, but many here say the pronouncement came too soon.

Boko Haram, an Islamist militant group, was formed in the early 2000s. Its name translates loosely from Hausa as “Western Education is Forbidden”.

Much international attention has focused on the kidnapping by the group in 2014 of 276 schoolgirls from Chibok, but locals here have trouble understanding the focus on this one incident.

More than 10,000 women and children have been abducted by the terror group, the women made to work as “slaves” or forced to marry militants, while some young children are recruited to fight.

At least 20,000 people have been killed in the eight years since the group, founded in 2002, began its insurgency in pursuit of the creation of an Islamist state.

At one stage, between 2014 and early 2015, Boko Haram controlled swathes of territory equivalent to the size of Belgium. But a renewed effort by the Nigerian military, combined with local vigilante groups, has seen it pushed back to the Sambisa Forest, a former game reserve southwest of Maiduguri.

Last week the vice-chairman of Chibok, Yakubu Umar, was among a group that was ambushed by Boko Haram militants while on a road leading out of Maiduguri. At least 10 policewomen were abducted in the incident, leading Boko Haram’s leader Abubakar Shekau to release a video saying their future was as “slaves”.

Umar, who was shot in the arm, said he escaped by the “grace of God”. He had been on his way home to Chibok to meet a presidential committee and tell them how well the recovery was going, he told me, sitting in a hospital bed, in a ward in Maiduguri’s State Specialist Hospital reserved for those wounded in the conflict.

There were 19 other men, boys and babies in the same room, with injuries of various severity. Many were hurt in an attack on the night of June 7th, the largest assault on the city in almost two years.

Taxi driver Mohammad (19), showed me where the skin was ripped off his back as a bomb went off behind him. His brother was killed.

As the war continues in northeast Nigeria, a humanitarian crisis is unfolding. More than 2.5 million people have been displaced after running for their lives when the Boko Haram militants captured their towns and villages.

Separated from their farms and regular livelihoods, they rely on international NGOs for support. NGOs provide life-saving care, but their spending is also driving up prices for locals in the city.

As many as 450,000 children across the northeast in three states – Borno, Yobe and Adamawa – could suffer from severe acute malnutrition this year, according to the United Nations Children’s Fund, Unicef, and 5.2 million people in total in the regional are in need of food aid.

“The emergency is far from over,” said Kate Nolan, mission head with the charity Médecins Sans Frontières in Nigeria, adding that her medics feared the outbreak of disease and the impact that could have on their already stretched resources.

“Hundreds of thousands of people remain almost entirely dependent on aid for their survival. A rupture in the provision of this life-saving assistance could have deadly consequences,” she said.

One location has been targeted by bombers more than any other over the last few months. Stretching to about 30 sq km, the University of Maiduguri (Unimaid) is almost its own town.

Inside a beige outer wall it has bustling markets and busy taxis, and 40,000 students when classes are in session. The side that faces the city is heavily guarded, but the rear is less well monitored, making it possible for bombers to sneak over the parameter.

Three of Sunday night’s bombs went off here, killing a female security guard who also worked as a cook at a nearby hotel.

On Monday, in a move designed to assuage fears, the governor of Borno State Kashim Shettima approved spending of 50 million naira (€139,182) to go towards digging a trench around the back of the campus.

Around the corner from the mosque where Boko Haram were first founded, members of a local vigilante group say they’re fed up with fighting

But a simmering tension may not be solved by trenches.

When I visited Unimaid two days after the attacks, the military stationed outside said they didn’t have any faith in the university’s own security. “I don’t trust anyone in this town,” one commented, speaking from under a tree where he sat, a rifle balanced on his lap.

His opinion was echoed by a university academic, who spoke on condition of anonymity. The lecturer accused the university’s security guards of “aiding and abetting” Boko Haram, adding: “I believe the people in this town, if they want to end [the conflict], it will end.”

Despite the level of fear and anger, the mood in Maiduguri is shifting as fatigue sets in. Around the corner from the mosque where Boko Haram were first founded, members of a local vigilante group say they’re fed up with fighting.

The Civilian Joint Task Force was formed in 2013 to oust Boko Haram from Maiduguri, with the aim of stopping the Nigerian army from harming innocent civilians in the process. It boasts about 26,000 members and uses its knowledge of each neighbourhood to spot anyone acting suspiciously.

The vigilantes’ exhaustion is even leading them to reconsider how they would treat any militants who give up arms.

Yakubu Tanko, (43), a former clothing salesman who lost his business when insurgents burned it, and whose family now live in a car park, said he had previously felt cheated by the militant group.

Now he believes Boko Haram is acting under a spell, and might change if it was released from it. “We came to realise there is not any responsible person that will carry a gun and kill his parents. We think they are charmed.”

Tanko paused, choosing his words carefully. “We decided to make up our minds that if they surrender, when they come we will keep them for some time and let them rehabilitate and see if there are changes.

“If there are, we can forget and forgive.”