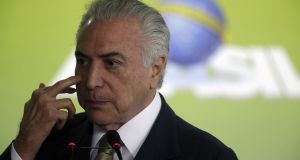 Brazilian president Michel Temer: facing corruption charges and could be removed from office for 180 days while the supreme court decides his fate. Photograph: Joédson Alves/EPA

Amid rising political tensions the corruption charge against Brazilian president Michel Temer reached the lower chamber of congress on Thursday, formally starting the countdown towards a vote that could see him removed from office.

On Monday Brazil’s chief federal prosecutor Rodrigo Janot charged Temer with “passive corruption” after a close aide was filmed in April receiving a suitcase containing 500,000 reais (€135,000) in cash from a business executive. Prosecutors claim the money was part of a larger bribe destined for the president from Brazilian billionaire Joseley Batista.

If two thirds of the 513-member lower chamber vote to accept the charge, which is expected to be followed by others, Temer will be removed from office for 180 days while the supreme court decides his fate.

The president has dismissed the accusation against him as a “fiction”.

The corruption charge landed in congress the day after Renan Calheiros quit as senate leader of Temer’s populist Democratic Movement of Brazil Party (PMDB), accusing the president of a “cowardly posture” and saying his administration “did not have the legitimacy” to undertake an ambitious but deeply unpopular reform programme.

In a damaging parting shot he also claimed that the disgraced former leader of the lower chamber of congress Eduardo Cunha, also of the PMDB, “continues nominating ministers, giving orders directly from prison” where he is serving 15 years for corruption.

Cunha was the key architect of the impeachment of then president Dilma Rousseff last year which handed the presidency to Temer. He was then removed from office by order of the supreme court, arrested, tried and sentenced for his role in the Petrobras corruption scandal.

In a secret recording made by Batista of a clandestine meeting with Temer in March, the businessman outlined to the president covert payments he was making to Cunha in order to buy his silence.

According to federal police president Temer then “encouraged” him to continue with the scheme. Cunha denies receiving any payments. The president says the recording cannot be used against him as it is “illicit”.

Calheiros, who is also the subject of numerous corruption investigations, said Cunha’s continued influence over the Temer administration “belittles a government whose Republic is in danger in his hands”.

A long-time party rival to Temer and a wily political survivor, Calheiros’ outburst is the latest signal that the president’s once formidable coalition in congress is fraying amidst mounting accusations of wrongdoing and plummeting approval ratings.

Earlier on Wednesday the president defiantly ignored tradition and the favourite candidate among federal prosecutors to succeed Janot when he steps down in September. Janot ally Nicolao Dino topped a poll of 1,200 serving and retired prosecutors held to draw up a three-person short list. But in a snub to the chief prosecutor who has charged him, the president broke with precedent to select the second-placed candidate, Raquel Dodge, who once approved by the senate will become the first woman to hold the position.

Unaligned with Janot, she will take over responsibility for the ongoing corruption investigations into the president as well as dozens of ministers, governors, senators and federal deputies.

Senior prosecutorial colleagues said they did not expect her to hinder the anti-corruption purge under way in Brazil. They point out Dodge first rose to prominence with the successful prosecution and jailing for corruption of the then governor of Brazil’s federal district José Roberto Arruda.

With his problems mounting at home, Temer has also cancelled his planned participation at the G20 meeting in Hamburg next week. The move follows a gaffe-filled presidential trip earlier this month to Russia and Norway.

The voyage got off to a shaky start when Temer’s official itinerary announced that he would be visiting the “Federative Socialist Soviet Republic of Russia” and worsened when Norwegian prime minister Erna Solberg used a joint press conference to say Brazil must tackle its corruption problem. Later Temer referred to Norwegian king Harald as the “king of Sweden”.