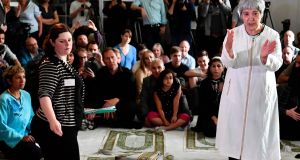 As a lawyer and women’s activist, Seyran Ates has been cursed, spat on and shot at. Dressed in a long white coat, her short grey hair uncovered, the progressive German-Turkish woman unveiled her boldest project to date on Friday morning: the country’s first liberal mosque.

Housed in a bright, third-floor room behind St John’s Church, in Berlin’s Moabit neighbourhood, the mosque has lofty ambitions: to reform Islam from within by offering a contemporary interpretation of the Koran to improve public perceptions of a religion hijacked by extremists.

“We are not inventing a new religion, we are simply showing our faces and taking a stand against Islamist terror,” said Ates (54), who began studying Islamic theology a year ago. “We want to give Islam another voice, the voice of reflective, common sense.”

The road to the new Ibn-Rushd-Goethe mosque, named after the Arabic philosopher and the German writer, began after the September 11th, 2001, attacks. As the post 9/11 public debate raged on, dominated by Islamist violence and the “war on terror”, Ates and her friends began wondering why voices of liberal Muslims like them were rarely heard.

The real motivation for the mosque came in 2006 when Wolfgang Schäuble, Germany’s then interior minister, invited Ates to participate in the forum at a German Islam conference.

Instead of discussing issues of importance – integration, education, discrimination – the conservative Muslim organisations in attendance attacked Ates as having no legitimate mandate to be there.

“This although they represent just 15 per cent of the Muslim population in Germany,” she remembers.

As part of the 85 per cent majority, Ates found herself excluded twice over, as a woman and as a liberal, and waiting. Not for Godot, she jokes, but God: a different kind of God than the one on offer by the existing Turkish and Arab mosques.

After waiting in vain for others to push for change, she decided a year ago that she would have to be the change. She found the space for the new mosque in a former theatre behind the Berlin church, and began renovating. Her brother painted the 90sq m space and her sister bought as many prayer carpets as she could find on holiday in Turkey.

The Berlin space is leased for a year and financed personally by Ates, though donations are flowing in and expressions of interest for similar mosques have come from Hamburg, Bremen and elsewhere.

“It’s a super feeling to know I am not alone with my thoughts on this,” she says.

At the opening ceremony she stressed the new mosque as a place for all: Sunni, Shia, Alawite and Sufi Muslims. In this mosque, women and men pray together and both men and women preach – in German. Gays are welcome, as are non-Muslim neighbours.

So many progressive ideas under one mosque roof are, depending on your perspective, revolutionary or blasphemous. A man wrote online that Ates would burn in hell for insisting she would pray in her new mosque without a headscarf.

“I replied by asking whether he viewed himself as God, to judge whether I was a good or a bad Muslim,” she said. “Such ugly messages happen but the reaction as a whole as been hugely positive.”

As a women’s rights lawyer, specialising in cases involving Muslim women, Ates is no stranger to slurs and threats.

Eight years ago she published a book titled Islam Needs a Sexual Revolution, and was put under police protection after a shot was fired in her direction. Now she is back in the spotlight, but this time she is not alone. A fellow backer of the new mosque is the Freiburg Islam specialist Abdel-Hakim Ourghi, who helped lead the first Friday prayers.

“The mosque is a chance for Muslims to redefine themselves,” he said.

Conservative Muslim organisations have to explain why they have done so little to spread a tolerant, merciful Islam, while liberal Muslims have to ask themselves why they let conservatives take over the practice of their faith.

Above all, says Ates, all peace-loving Muslims have to stop taking the easy way out over Islamist extremists, dismissing them as not being true Muslims.

“The men who shout allahu-akbar and behead people see themselves as Muslims . . . They pray five times a day, they go to the mosque,” said Ates. It’s not for other Muslims to dismiss them, or ignore them, she says, but to challenge them with what Islam can and should be in the modern world.

“Today we don’t do everything that was set down in the seventh century,” she said. “Defending your religion in the 21st century does not mean, literally: ‘go out and kill others’.”