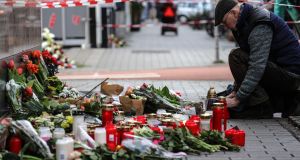 People place flowers and candles at a makeshift memorial for the racist terror attacks in Hanau on Thursday. Photograph: Armando Babani/EPA

Germany faced calls to toughen gun ownership laws and step up efforts to track far-right sympathisers after the suspect in one of its worst mass shootings since the second World War was found to have published a racist manifesto.

The 43-year-old presumed killer of nine people in two shisha bars in the southwestern town of Hanau late on Wednesday had posted the document, espousing conspiracy theories and deeply racist views, online.

The suspect, who is believed to have killed himself and his mother after the shootings, belonged to a gun club, raising questions as to how a man with such ideological convictions managed to gain membership and obtain the weapons he used.

“We need new and stricter laws to regularly and thoroughly check owners of hunting and firearm licences,” Bild – Germany’s biggest-selling newspaper – wrote on its front page. “We immediately need more [intelligence] positions to monitor right-wing radicals and intervene before it’s too late.”

Interior minister Horst Seehofer later told Bild that the government would initiate reforms to intensify checks on gun owners. “This is not only about the question of whether someone has properly stored his weapon or kept the ammunition separate from it – it must also be about very personal matters,” he said.

The ministry subsequently said in a statement that it was looking at making such checks in cases where gun owners were conspicuous to the authorities, and that across-the-board psychiatric tests would not be introduced.

Federal prosecutor general Peter Frank said on Friday that the suspect had a licence for two weapons, and it remained unclear whether he had contacts with other far-right sympathisers at home or abroad.

Mr Frank added that the gunman had sent a letter to prosecutors in November complaining about an unknown intelligence agency with powers to control people’s thoughts and actions.

“The letter did not include his racist calls for the extermination of certain peoples,” Mr Frank told a news conference. “We did not launch an investigation based on the letter, which later appeared in the gunman’s racist manifesto.”

German media speculated that the gunman may have suffered from mental illness. Joerg Meuthen, a senior member of the right-wing Alternative für Deutschland, tweeted: “He should have been in a psychiatric ward! Instead, they want to blame us for it.”

Michael Roth, Germany’s state secretary for Europe, called the AfD “the political arm of right-wing terrorism” after the shooting spree.

In October, chancellor Angela Merkel’s government outlawed the sale of guns to members of extremist groups monitored by security agencies and obliged online platforms to inform police about hate content.

Those measures followed the killing of a pro-immigration German politician in June and an attack four months later on a synagogue and a kebab shop in Halle by an anti-Semitic gunman who livestreamed his actions.

At least five of the Hanau victims were Turkish nationals, Ankara’s ambassador to Berlin said on Thursday. His government demanded a robust response, calls echoed by representatives of Germany’s large Kurdish community.

Mr Seehofer, leader of the Bavarian CSU, the sister party to Dr Merkel’s CDU, said security forces had had successes in preventing hate crime, citing this month’s arrest of a far-right group accused of planning attacks against minorities.

But the threat from right-wing extremism, anti-Semitism and racism remained “very high” and existing laws needed to be enforced more robustly, he said.

Germany already has one of the lowest rates of death by firearms of any country. One member of Dr Merkel’s CDU questioned what more could be gained by additional legislation.

“It will remain difficult to identify people who radicalise themselves in isolation and become lone perpetrators,” lawmaker Mathias Middelberg told the Deutschlandfunk public radio.

For others, the killings are rooted in deeper social issues that need to be tackled at source.

“Actions by the state are not enough. Each of us has a responsibility,” the chief editor of daily Sueddeutsche Zeitung wrote in a commentary.

“That begins with bad jokes and doesn’t just end with an unquestioning acceptance of everyday racism. We need to clearly call out such things for what they are.” – Reuters