Surprising remnants include name-change provision with basis in Nuremberg Laws 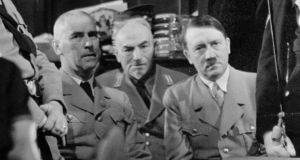 Germany is making a final push to remove lingering traces of the Nazi era from its statute books – including provisions that discriminate against Jews introduced under the Nuremberg Laws.

After a thorough scan of postwar Germany’s civil code, the federal anti-Semitism commissioner Felix Klein discovered 29 cases of laws from the so-called Third Reich era that had yet to be deleted entirely.

The most surprising remnant, buried in Germany’s laws on changing a name, is a paragraph introduced as part of the 1938 Nuremberg Laws.

These laws provided codified grounds for discriminating against the country’s Jewish population. In this case it required Jewish men and women whose names were not easily identified as “typically” Jewish – on a list compiled by the Reich interior ministry – to add an additional forename to their own in all official documents: Israel for men and Sara for women.

“The name change law is the most blatant of all,” said Mr Klein. “Anyone who wants to change their first or last name in Germany today is [still] confronted with this anti-Semitic-motivated law from 1938.”

He noted that the current version of the law, from 2008 and visible online, contains references to the “German Reich”, a forerunner of the current German state, and the “Reich Minister of the Interior”.

The name change law came into effect in January 1939, and gave Jews one month to register their “new” name or face a prison sentence of up to six months.

It was drafted by Hans Globke, a leading Nazi official who worked for the first West German chancellor, Konrad Adenauer.

The postwar occupying powers moved quickly to purge the Israel/Sara law, but its complete deletion was prevented by provisions in the (West) German postwar constitution, the Basic Law.

Mr Klein said he had already sent the German Bundestag a complete list of anti-Semitic holdovers on the statute books requesting reformulation or deletion.

Other laws tainted by the Nazi past are paragraphs on natural healers, casino gambling and a civil law on Greek-German mutual assistance.

As well as removing the anti-Semitic references in the German statute book, Mr Klein has requested all references be removed that describe the federal interior minister in the (West) German federal republic as the legal “successor” to the Reich interior minister Wilhelm Frick.

In the Nazi era, Frick pushed the Israel/Sara law, based on concerns that Jews, to avoid repression, would change their name.

The main claim to fame of Frick, convicted at the Nuremberg Trials and executed in 1946, is securing German citizenship for the Austrian-born Adolf Hitler.