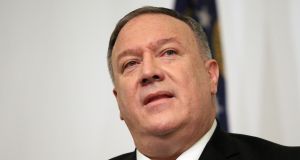 Mike Pompeo: said the terrorist designation would give the US “additional tools” to pile pressure on Iran, which has supported Houthi rebels. Photograph: Tami Chappell/AFP) via Getty Images

Aid agencies have sharply criticised the Trump administration’s decision to designate Yemen’s Houthi rebels a terrorist organisation, warning it will threaten food and medicine deliveries to ailing and starving civilians.

The US “must ensure crystal clear exemptions that enable free flow of lifesaving food, fuel medicine”, he said. Mr Egeland said he had warned the US not to “criminalise” aid agencies’ work with the Houthis.

The UN has also said the designation could bar the Saudi-led coalition fighting the Houthis from negotiating to end the six-year war devastating the region’s poorest country.

US secretary of state Mike Pompeo announced the decision late on Sunday. Despite opposition from US lawmakers and former diplomats, he declared: “The designations are to hold [Houthis] accountable for [their] terrorist acts, including cross-border attacks threatening civilian populations, infrastructure, and commercial shipping”.

The timing could not be worse. Children are dying of hunger in hospitals in Yemen. Due to a cut in US donations and the failure of other donors to deliver on pledges, only $1.6 billion, half last year’s budget, has been provided. UN secretary general Antonio Guterres has stated: “Yemen is now in imminent danger of the worst famine the world has seen for decades.”

Houthi drone and missile strikes on Saudi oil facilities and airports and Gulf shipping have retaliated for the destruction and death wreaked by Saudi bombers and Saudi and Emirati forces in Yemen where, the UN estimates, 233,000 have died, including 131,000 from lack of food and medical care.

Mr Pompeo argued the terrorist designation would give the US “additional tools” to pile pressure on Iran, which has provided the Houthis with limited support since March 2015 when Saudi Arabia and the Emirates mounted a military campaign to defeat the rebels, who control the capital Sana’a and the north, and reinstate the Riyadh-sponsored regime that had been ousted by the rebels.

The White House’s move is primarily designed to undermine efforts by the incoming Biden administration to revive relations with Tehran by re-entering the 2015 agreement, abandoned by president Donald Trump, in which Iran agreed to curb its nuclear activities in return for an easing of sanctions.

“This is making a strategic enemy out of a local [Houthi] force that has been part of Yemen for generations,” he said.

Unless Congress blocks this decision within seven days, the terrorist designation will come into effect on January 19th, the day before the inauguration of Mr Biden, who also seeks to end the Yemeni war and recalibrate relations with Saudi Arabia, the main external protagonist.