December trading is like a ‘life buoy’, hospitality sector says 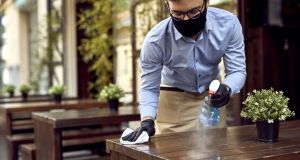 Publicans say it is better to have people in pubs than attending house parties. Photograph: iStock

The December trading period is like a “life buoy” for hospitality businesses, representatives have said, as they called on the Government to allow the sector to “reopen as fully as possible” after Level 5 restrictions

The Government is entering a pivotal week as it works to finalise a plan for exiting the lockdown from December 1st.

It is expected the restrictions will be lifted in two stages, starting next week with a further reopening before Christmas if infection numbers do not increase significantly.

The leaders of the three Coalition parties will meet on Monday. A special Cabinet meeting is expected later this week to agree the plan for exiting the lockdown.

Almost 500 hospitality and events firms have written to Taoiseach Micheál Martin calling for the sector to be reopened from December 2nd.

“Hotels can help to ensure a safer reopening thereby minimising the risk of increased infection rates. Public health is the number one priority for hotels, and this is reflected in the statistics from the HPSC, which show that hotels have been associated with very few clusters (0.14 per cent) since March,” he said.

“People still expect to be able to celebrate the festive season in a meaningful way. Overly complicated or onerous restrictions could be counterproductive, and increase, rather than reduce the risk from Covid-19,” he added.

Mr Fenn said the federation is urging the Government to “recognise the important role hotels can play”.

“ This five week trading period around Christmas can act as a life buoy in terms of sustaining many hotels for the early few months of next year.”

The chief executive of the Vintners’ Federation of Ireland (VFI) Padraig Cribben claimed that opening all pubs for Christmas would be safer as it would mean fewer unregulated house parties.

He said there should be no distinction between “wet” pubs and those which serve food, because having all pubs open would “spread the load”.

The numbers allowed into any premises should be based on the capacity of the venue for social distancing, he added. Some premises would not open because of their size or if there were vulnerable family members, he told RTÉ’s Morning Ireland.

“People are going to socialise. The Government needs to ask is it better to have them in a controlled environment or in a domestic setting where there’s very little social distancing and no wearing of masks,” he added.

Adrian Cummins, chief executive of the Restaurants Association of Ireland, warned there could be a “collapse” of the restaurant industry in January, if it is not allowed to open for December.

He said about 30 per cent of the sector’s annual income comes from December trading.

“You can’t eat and drink and wear a mask at the same time,” she told RTÉ radio’s Morning Ireland. Not wearing a mask in an indoor setting meant the virus could be transmitted.

There was evidence that restaurants and pubs were “significant sites” of the spread of the virus, she said. The levels of the virus in the community needed to be far lower than the current levels before they could open.

“I can’t see it being safe in December.”