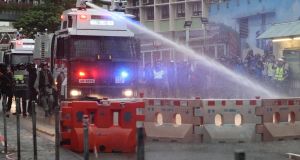 An anti-riot police vehicle equipped with a water cannon clears the road from a barricade set up by protesters during an anti-government rally in Kwai Fung and Tsuen Wan in Hong Kong on Sunday. Photograph: EPA

Police in Hong Kong have fired teargas and used water cannon on protesters after tens of thousands of people poured on to the streets on a rainy day in an area noted for its links with triad gangsters, where demonstrators were attacked by stick-wielding men two weeks ago.

At least one petrol bomb was thrown by protesters. The water cannon, which had not been used in years of anti-government protests, soon pulled away.

The protest, which has been sanctioned by the police, followed violent clashes the night before during which police arrested 29 people, including the organiser of the peaceful march earlier in the day.

After almost three months of continuous protests, demonstrators said they remained as determined as ever in their fight for political rights.

The procession, made up of mostly black-clad protesters under a sea of colourful umbrellas, shouted slogans as they moved swiftly towards Tsuen Wan district.

By late afternoon, more than a hundred protesters were facing off against dozens of riot police, with four police vans parked behind the line. Police fired rounds of tear gas after 6pm local time.

Train services to the nearest metro station were stopped in a move to deter protesters from joining the march. Some protesters have vandalised stations following clashes with staff in recent days.

“The more the government ignores us, the more we have to come out,” said Peggy Tai, who is in her 60s.

The wave of protests, which started in early June to oppose a controversial extradition bill under which individuals could be sent to mainland China for trial, have morphed into a broader anti-government movement.

Demonstrators have five demands: the complete withdrawal of the now-suspended extradition bill; the setting up of an independent body to investigate police violence; a halt to the characterisation of protests as “riots”; an amnesty for those arrested; and a resumption of political reform to allow the free election of Hong Kong’s leader and legislature.

Many at the protest condemned the police’s now-routine use of teargas, rubber bullets and beatings to disperse crowds.

Protesters on Saturday also hurled suspected petrol bombs, bamboo rods and bricks at police in a game of cat-and-mouse across the city.

“Police violence has stepped up and teargas seems so commonplace now,” Tai said.

Another demonstrator, Kelvin Chu, said even though he felt tired he would not stop protesting so long as the Hong Kong government did not respond to people’s political demands. “I can understand why people are escalating their actions, because the government is not responding,” he said. “It is all up to the government.”

Hong Kong’s leader, Carrie Lam, said earlier in the week that she would establish platforms for dialogue although protesters dismissed her offer and said she needed to respond to their demands.

Hong Kong police said those arrested on Saturday were aged between 17 and 52 and had been detained for unlawful assembly, possession of offensive weapons and assaulting police officers.

Among those arrested was the organiser of the police-sanctioned Saturday march, Ventus Lau, who was held on suspicion of unlawful assembly, Hong Kong Free Press reported.

The violent confrontations took place after more than a week of mostly peaceful demonstrations in the semi-autonomous city. Last weekend there were the first teargas-free protests after organisers called for peaceful and non-violent expressions.

A rally at Yuen Long station on Wednesday turned into a tense standoff between police and protesters but ended without violence. Another rally in the form of a human chain that stretched for kilometres on Friday also ended without incident. - Guardian