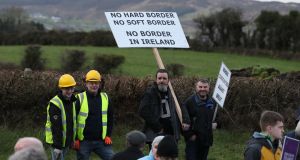 A third of the State port veterinary inspectors to be recruited for Brexit have still to be hired with just days until the UK is due to leave the EU.

The Department of Agriculture, Food and Marine said that 46 staff are available to take up “portal inspector” duties at Dublin and Rosslare ports, one third short of the targeted 70 new recruits for these roles.

Food safety and agri-food checks - the so-called sanitary and phytosanitary (SPS) controls - will be among the most intensive inspections to be carried out at the new EU-UK border in Ireland after Britain’s exit.

EU rules dictate that compulsory physical checks must take place at the country’s Border Inspection Posts on live animals and animal-related food products coming into the State from non-EU “third countries,” including checks on 50 per cent of all poultry, milk, egg and related food products.

The Government has been staffing up veterinary inspectors at the department to check UK food imports coming in from Britain but has yet to reveal how it plans to deal with north-south checks on food coming from Northern Ireland in the event of a no-deal Brexit, repeatedly stressing that it plans no hard border.

The portal inspectors are just part of the overall recruitment drive by the department. It also plans to deploy about 230 staff for Brexit duties, including new recruits, redeployed staff and temporary contractors.

“A further group of new recruits are expected to commence employment shortly and will be assigned to portal duties as they become available,” said a spokeswoman for the department.

The department had no response to a query on how many of the 230 staff had been deployed.

“A combination of new recruits and redeployed staff are currently undergoing extensive training in preparation for conducting control functions at Dublin and Rosslare ports and documentary checks at our headquarters offices,” said the spokeswoman.

“Staff will be assigned to import control duties as soon as they are required to do so. This will be supplemented with contracted personnel as needs emerge.”

In February, the department issued a tender for a €4 million contract to provide “border inspection post veterinary” services on the import of live animals and animal products after the UK leaves the EU.

The contract left open the possibility that the services of the contractor vets would be required at locations other than the approved border inspection posts or BIPs at Dublin Port, Dublin Airport and Shannon Airport along with Rosslare Port, which is to be approved as the State’s fourth BIP.

The UK is legally due to leave the EU on April 12th with no deal or May 22nd if Westminster can ratify an agreement. Brexit could be delay beyond these dates if the UK parliament fails to sign off on a deal.

A spokesman for Minister for Agriculture Michael Creed said the department was “extremely satisfied” it would be able to cope with a no-deal Brexit by redeploying people and “pulling people from various corners.”