Result of looming byelection ‘even bigger’ than Euro elections – Farage 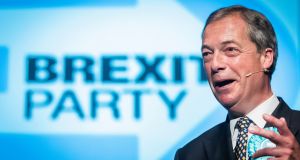 Brexit Party leader Nigel Farage during a Brexit Party rally at the Broadway Theatre in Peterborough on Saturday, ahead of the upcoming by-election. Photograph: Danny Lawson/PA Wire

Nigel Farage has said the outcome of the coming Peterborough byelection will be “even bigger” than the European elections, in which his Brexit Party won 29 seats.

His party is the bookmakers’ favourite to win the constituency, which has traditionally been a closely fought battle between Labour and the Conservatives.

The June 6th byelection was called after Peterborough’s previous MP Fiona Onasanya was forced out after she was jailed for lying about a speeding offence.

Onasanya was elected as a Labour MP and was later suspended from the party after she was sentenced.

Mr Farage, speaking at a packed rally in Peterborough on Saturday, said the byelection is “the opportunity for the next chapter in this great story” following the European elections.

He said he thought the Brexit Party “must be doing quite well”, as former prime minister Gordon Brown visited Peterborough this week to campaign for Labour.

“It shows you that our political establishment were absolutely mortified by what happened last Sunday [in the European elections],” he said. “But in some ways what happens here on Thursday [in the byelection] is even bigger.”

He said the Labour Party has a “very good, well-honed byelection campaign machine” and has been working the ground for “many months”.

Urging party supporters against complacency, he added: “Don’t underestimate how hard the Labour Party will try.”

Mr Farage said that if his party’s candidate, Mike Greene, a businessman who has appeared on Channel 4’s Secret Millionaire, becomes the first Brexit Party MP then “we will have them on the run”.

The Brexit Party has not published a manifesto, and Mr Farage was asked about future policies during a Q&A segment.

He said he would be “on the side of” small businesses, would campaign to get rid of “ridiculous, expensive vanity projects like HS2” and achieve Brexit.

Mr Farage also said he would stand as a candidate in a future general election.

He added: “If we don’t leave the EU on October 31 in a way that is recognisable to those that voted for Brexit, then I predict the end of a two-party system that now serves nothing but itself and not this country.”

Mr Greene said the question he is asked most often on the doorstep is: “What’s in your manifesto?”

He said: “We don’t want a manifesto because we believe it’s come to mean political broken promises.

He went on to make a series of pledges to the Peterborough constituency, including that he would make education better and help create more jobs.

Criticising the candidates for the established political parties, Mr Greene said: “If one of those becomes the MP for Peterborough they will become backbench whipping fodder.

“By the very nature of being the first Brexit MP in Westminster I will be Peterborough’s frontbench representative.” – Press Association