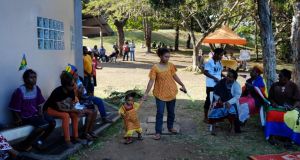 Citizens wear traditional costumes outside the venue for the closing meeting of the Kanak and Socialist National Liberation Front (FLNKS) campaign for a ‘yes’ to New Caledonia’s independence from France in Noumea, on the French overseas territory of New Caledonia, on October 30th, 2018 Photograph: Theo Rouby/AFP/Getty

One of the last chapters in French colonial history will be written on Sunday when 175,000 voters in the French territory of New Caledonia, 17,000km from mainland France, will be asked: “Do you want New Caledonia to accede to full sovereignty and become independent?”

The British explorer Captain James Cook discovered New Caledonia in 1774. Napoleon III seized the archipelago in 1853, because he wanted to build a penal colony in a more salubrious place than the malarial swamps of Guyana.

The French labelled the indigenous peoples “Kanaks”, the Polynesian word for “human being”. It was a derogatory term until the 1970s, when the nascent independence movement turned it into a badge of pride.

France peopled New Caledonia with political opponents and criminals until 1924. Some 4,000 survivors of the 1871 Paris Commune were sent there, including the “red virgin” Louise Michel.

“I have not travelled 6,000 leagues to see nothing and do nothing,” Michel wrote to Victor Hugo, telling him of her plans to establish a school for Kanaks. She also wrote to the newspaper editor and statesman Georges Clémenceau, urging him to make revolution. Political opposition was insufficient to transform democracy, Michel said.

Most of the communards returned to mainland France. Other freed prisoners were not allowed to do so. Instead, they and European settlers were given land expropriated from Kanaks. Like native north Americans, the Kanaks were consigned to reservations. They too proved particularly vulnerable to the white man’s diseases, and died in their multitudes. By 1920, the Kanak population had diminished by more than 50 per cent.

Missionaries sowed religious division between Catholic and Protestant converts. The Europeans pitted tribes against each other. Ataï, the leader of the first revolt in 1878, was assassinated by a fellow Kanak. His decapitated head was sent to the Musée de l’Homme anthropology museum in Paris. His skull was returned in 2014.

About 1,000 people were killed in the 1878 Kanak revolt, between 200 and 300 in 1917, and more than 80 in the mid-1980s. Speaking in the capital Nouméa on May 5th, French president Emmanuel Macron said, “New Caledonia carries the memory of revolts suppressed in blood, and of divisions between tribes, organised by the coloniser to better enslave them.”

It was not up to the president of the Republic to take sides in Sunday’s referendum, Macron said, nonetheless remarking that “France would be less beautiful without New Caledonia”.

Late in the spring of 1988, Kanak separatists killed four gendarmes in the attempted takeover of a barracks. The separatists retreated to a cave at Ouvéa, taking gendarmes as hostages. A further 21 people died in an assault by French shock troops, inluding 19 separatists and two soldiers.

Paradoxically, the deaths at Ouvéa precipitated the Matignon accords in June 1988. They were signed by the Kanak leader Jean-Marie Tjibaou and the Caldoche (European Caledonian) leader Jacques Lafleur.

A year later, at the ceremony marking the end of the mourning period for the 19 dead separatists, Tjibaou and his assistant were assassinated by a radical Kanak who refused to accept the peace treaty. Shades of Béal na Bláth.

The French government took a softly, slowly approach to Kanak independence. Cynics said they wanted to continue to profit from New Caledonia’s mines, which hold one quarter of the world’s nickel reserves. But the price of nickel has collapsed because the precious metal is produced more cheaply in Brazil, China, Indonesia, Myanmar and the Philippines. Nickel mining is the territory’s second largest employer, after the civil service. The Paris government keeps the archipelago afloat with €1.4 billion in annual subsidies.

Kanaks were given the right to vote in 1957. Although they constitute the single largest group, with 39 per cent of the population of nearly 300,000, they are nonetheless a minority compared to Europeans combined with immigrants from elsewhere in the south Pacific. Those who have immigrated since 1993 are excluded from Sunday’s referendum, in which Kanaks constitute 46 per cent of registered voters.

The 1988 Matignon accords foresaw a referendum in 1998. Instead, a new agreement, the Nouméa accords, postponed the vote until 2018. Sunday’s election has been 30 years in the making.

Polls indicate that between two-thirds and three-quarters of registered voters will say no to independence. The pro-independence argument was summed up by Tomasi Tautuu, an immigrant from the French territory of Wallis and Futuna. “This process must end some day,” Tautuu told Le Monde. “If we’re not ready now, we’ll never be ready.”

No voters say New Caledonia does not have the capacity to govern itself, and that independence would impoverish the islands. And they fear an assertive China would be more than happy to take France’s place.

If they lose, separatists can in any case call one or possibly two more referendums over the next four years.