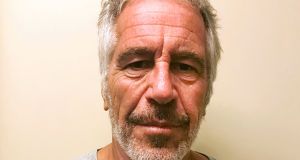 Jeffrey Epstein: Told the woman “that she did nothing wrong” after raping her, according to the lawsuit. Photograph: New York State Sex Offender Registry via AP

A New York woman who said Jeffrey Epstein groomed her for sex starting when she was 14 and then raped her a year later sued his estate Wednesday, one of many possible lawsuits that his estate may face after his death by an apparent suicide.

While Epstein’s death ended a federal criminal prosecution on child sex trafficking charges, his estate may still have to defend against civil suits. He was believed to have been worth at least $500 million (€450 million).

Other women who have said they were victimised by Epstein said they planned to file lawsuits, and a new state law in New York that expands the amount of time that sexual abuse victims can sue could open the door to more claims.

Epstein (66) died last Saturday of apparent suicide in a Manhattan federal jail where he had been held since his arrest in early July, authorities said.

In 2002, about a year after they met, Epstein pulled Ms Araoz on top of him during a massage and raped her, according to the lawsuit. She did not visit his town house again, she said. His lawyers could not immediately be reached for comment.

Ms Araoz also sued the women she said helped Epstein, including Ghislaine Maxwell, Epstein’s longtime confidante and the daughter of Robert Maxwell, a British publishing magnate. They also include three unnamed household staffers, including Epstein’s secretary, his maid and a woman she called “the recruiter”.

Dan Kaiser, Mr Araoz’s lawyer, said his client did not interact with Ms Maxwell at the town house but included Ms Maxwell in the suit because she was “one of the centre spokes of this conspiracy”. “It wasn’t just Jeffrey Epstein,” Mr Kaiser said.

Ms Maxwell “helped maintain the ring and is responsible as a co-conspirator for the injuries that Jennifer suffered. There was a whole circuit of enablers around him, adults who permitted this to go on.”

Ms Maxwell’s attorneys did not respond to a request for comment. She has emphatically denied past accusations that she participated in sex trafficking.

Ms Araoz (32) first told her story to NBC News in July, after Epstein was arrested at Teterboro Airport in New Jersey on the federal charges. Her lawsuit could be one of many new claims that are filed against the Epstein estate in New York under the new law passed this year.

In her lawsuit, Ms Araoz said she was groomed by the unnamed “recruiter” – whom she described as a brunette – outside Talent Unlimited High School, where she was a freshman.

Ms Araoz, who was raised in modest means by a single mother in Queens, said she confided to the woman about the recent death of her father from Aids. She and the woman met for several weeks before meeting Epstein in his town house, located a few blocks from her school on the Upper East Side, the lawsuit said.

“Ms Araoz was a prime target for grooming by a paedophile like Mr Epstein,” the suit said. Ms Araoz returned to the town house alone, where Epstein gave her a tour of the palatial building, one of the largest private residences in New York City.

The lawsuit contained remarkable details about the home: Many rooms had elaborate murals painted on the ceilings, and a trophy room was filled with exotic animals, including a stuffed giraffe.

In Epstein’s master bathroom, prosthetic breasts had been mounted on the wall so that he could “look at or play with while in the bathtub”, the lawsuit said. Epstein led her to his “favourite room” in the house, a large massage room with a blue ceiling painted with clouds and angels on one of the upper floors.

In the autumn of 2002, the lawsuit said, Epstein instructed her to take off her underwear and climb atop him to give him a massage. He then raped her and told her “that she felt amazing, and that she did nothing wrong”, according to the lawsuit.

She did not go to police after the incident.

On Wednesday, Ms Araoz said Epstein and the people around him “robbed me of my youth, my identity, my innocence, my self-worth”. Her lawyers said she had spoken to federal prosecutors who were preparing a case against Epstein. – New York Times