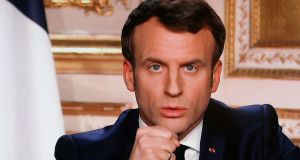 Emmanuel Macron: “Even if you show no symptoms, you may be contaminated and you can contaminate others. Show solidarity and a sense of responsibility.” Photograph: Ludovic Marin/AFP/via Getty Images

France is following the example of Italy and Spain in confining citizens to their homes, in the hope of slowing the Covid-19 epidemic, president Emmanuel Macron announced in a televised address on Monday night.

“We are at war,” Mr Macron said six times in a 20-minute speech. “A medical war. We are not fighting armies or another nation. But the enemy is there, invisible, and he is advancing.”

Medical personnel were “on the front line”. Surgical masks and disinfectant gel would be reserved for them. The government will pay for taxis and hotel rooms to ensure the “serenity” of health workers. The army will be asked to help transport patients.

The lockdown will last 15 days, Mr Macron said. Citizens who refuse to stay at home will be penalised. The government will “define the modalities of these new rules. Every infraction will be punished,” he said.

In Italy, those who break confinement rules can be fined €206 and risk three months in prison.

Earlier in the day, the director general of the country’s health system, Jérôme Salomon, said the number of cases is doubling every three days and hospitals risk becoming “saturated”.

Mr Macron called for a “sacred union” and closed all schools on March 12th, to confront the worst health crisis in a century. Two days later, the government closed all bars, restaurants, cafes and non-essential businesses.

But even as medical workers struggled to save lives, he noted: “We saw people gathering, as if nothing had changed,” Mr Macron said, referring to crowded cafes, markets and public parks on Sunday.

All France “must concentrate on a single objective, to slow the spread of the virus,” he added. People will be allowed out only to purchase food, seek medical care or work, if they cannot work from home.

Mr Macron asked citizens not to call hospitals unless they are running very high fevers or have difficulty breathing.

He urged French people to keep in touch with loved ones, “read, rediscover the essence of culture and education, avoid panic and false rumours”.

The external frontiers of the Schengen zone will be closed for the next 30 days, the president said. French citizens wishing to return home should contact consulates and embassies. The government will organise their repatriation.

Mr Macron also promised that no French person will be left without food or protection, and no French company will be allowed to go bankrupt. The state is suspending social charges, taxes, gas and electricity bills for companies.

Mr Macron also announced the postponement of the second round of municipal elections, which were scheduled for March 22nd. He said he received the unanimous support of all political parties for the postponement. He had bowed to pressure from the opposition to go ahead with the first round on March 15th.

To concentrate on the epidemic, Mr Macron is suspending all reforms undertaken by his government, including the unpopular pension reform which prompted six weeks of transport strikes in December and January.

“When the crisis is over,” Mr Macron concluded, “we will have learned a great deal. Certainties have been swept away... The day we win, we will be morally stronger.”