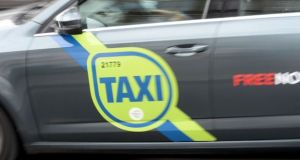 Taxi drivers are being advised to regularly disinfect their cars and opt for card payments where possible, in a bid to protect themselves and their passengers from coronavirus. File Photograph: Alan Betson/The Irish Times

Taxi drivers are calling on the Government to issue a directive on how they can help “ease the burden” being placed on ambulances and emergency services during the coronavirus pandemic.

Vinny Kearns, chief executive of NXT Taxis, said there has been a large decline in normal rides due to coronavirus, and that taxi services could be repurposed to help patients needing to attend medical appointments or for delivering grocery shopping for elderly or at-risk individuals.

“Anything that’s non-essential has really declined, and a lot of our competitors have closed their doors. From an economic point of view, that probably is the best thing for me to do,” Mr Kearns said.

“But we would be delighted to play our part, if we could take the pressure off emergency services. Ambulances could deal with emergencies and we could aid patients getting to essential appointments such as chemo, dialysis, blood transfusions.”

Mr Kearns has proposed a driver and car be provided exclusively to hospitals, drivers could dress in personal protective equipment and that cars will be cleaned after every ride.

Covid-19 is hitting the taxi sector particularly hard, with most companies and drivers reporting a decline in service users.

Alan Cooley, a taxi driver serving Dublin airport, said the number of people looking for a ride has dramatically reduced over recent weeks.

“The footfall coming through Dublin Airport has dropped substantially. If you’re in Dublin Airport, normally you would wait between half an hour and 40 minutes for a job. Now you’re looking at three hours for a job,” he said.

“Even though planes are coming into Dublin Airport, and the manifesto is saying they’re full, they’re not. You’re kind of put under pressure then that you have to take the job no matter what it is.”

He said he disinfects his car after every ride, but he still feels at risk of contracting the virus while serving people who have just returned from areas with a high level of cases.

“The people getting into your car, you have to bring them home, so you have to make that decision on spec.”

“First of all, it’s one of the occupations where you’re more vulnerable to get it because you’re in a closed area, a vehicle,” he said.

He added that the pandemic is hitting the sector particularly hard.

“Most are family men, and lots and lots of them have mortgages, so they need an income. As a taxi driver, you just don’t have any back-up as such. People in Amazon and stuff, they were all working from home – but we can’t do that.”

Free Now, the cab-hailing app, issued advice to its drivers and passengers amid the pandemic.

The company recommends that passengers touch the inside of the taxi “as little as possible”, while drivers should disinfect their cars regularly.

In a statement on its website, the company said drivers can switch to card payment only, and that the company has “temporarily turned off our Match taxi sharing service”.