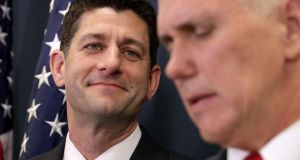 Leading Republicans broke with Donald Trump on Wednesday after the president-elect appeared to put more faith in WikiLeaks founder Julian Assange than in US intelligence agencies.

The sharp differences on a highly charged national security issue are the latest sign that matters of intelligence and policy towards Russia reflect a deep fault line in Mr Trump’s relationship with the Republican party establishment.

The House speaker, Paul Ryan, called Mr Assange “a sycophant for Russia” on a conservative radio show and GOP Senator Tom Cotton told MSNBCthat he had “a lot more faith in our intelligence officers serving around the world than I do in people like Julian Assange”.

The comments followed tweets from Mr Trump on Wednesday morning in which he approvingly repeated Mr Assange’s claim that the Russian state was not the source of the hacked emails from the Democratic National Committee and the Clinton campaign chairman, John Podesta, published by WikiLeaks during the election.

“Julian Assange said ‘a 14 year old could have hacked Podesta’ - why was DNC so careless? Also said Russians did not give him the info!” one Trump tweet said. Another quoted Mr Assange as describing US media coverage on the issue as “very dishonest”. Mr Trump added: “More dishonest than anyone knows.”

The tweets referred to an interview with Mr Assange conducted by Fox News commentator Sean Hannity, a vocal Trump supporter, in the Ecuadorean embassy in London, where the Australian computer expert and transparency advocate has been living for more than four years, since sexual assault allegations were made against him in Sweden. He denies the allegations and has not been charged with any crime.

Mr Assange is also under US criminal investigation for the publication of large numbers of classified US documents by WikiLeaks, an act characterised for many years by Republican and many Democrat leaders as an act of aggression against the US.

In the interview, Mr Assange said: “Our source is not the Russian government and it is not a state party.” US intelligence agencies have suggested that Russia passed the hacked material to WikiLeaks through intermediaries.

Julian Assange said "a 14 year old could have hacked Podesta" - why was DNC so careless? Also said Russians did not give him the info!

Last month US president Barack Obama deported 35 Russian diplomats in response to the election hacking, in a move criticised as premature by the Trump team. The president-elect praised Vladimir Putin for not taking retaliatory measures, saying: “I always knew he was very smart!”

Mr Trump has said he would make public new facts over election hacking known only to him either on Tuesday or Wednesday this week.

The spat is being played out at a time when one investigation into Russian hacking of the US election is nearing completion and another is just beginning. Both have the potential to undermine the legitimacy of the Trump presidency.

An intelligence community review of the evidence is expected to be delivered to Mr Obama on Thursday and will form the basis for a briefing for Mr Trump from top intelligence officials on Friday. Meanwhile, hearings begin on Russian cyber-attacks on Thursday in the Senate Armed Services Committee, chaired by John McCain, a Republican with hardline views on Russia.

Mr McCain called the alleged Russian cyber-attacks “an act of war” on Wednesday.

“I’m not saying it’s an atomic attack,” he said. “I’m just saying that when you attack a nation’s fundamental structure, which they are doing, then it’s an act of war.”

Mr Trump’s support for Mr Assange has not led to break with all his Republican allies. Sarah Palin said on Wednesday that she now regretted her attacks on Mr Assange in 2010 after he published leaked documents from her time as governor of Alaska.

“He is an anti-American operative with blood on his hands. His past posting of classified documents revealed the identity of more than 100 Afghan sources to the Taliban,” she said at the time.

“Why was he not pursued with the same urgency we pursue al-Qaeda and Taliban leaders?”

The Republican foreign policy establishment however, has been more resistant to such whiplash changes in views and allegiances. Many senior figures are uneasy about Mr Trump’s open feud with the US intelligence community.

On Tuesday, the president-elect trolled the US agencies, going so far as putting the word intelligence in quote marks.

“The ‘Intelligence’ briefing on so-called ‘Russian hacking’ was delayed until Friday, perhaps more time needed to build a case. Very strange!” he said on Twitter.

In response, intelligence officials briefed correspondents that the plan had always been for the Russian briefing to take place on Friday, and referred to his remarks as “adversarial”.