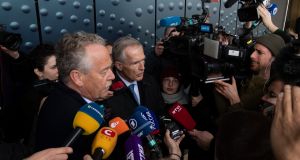 Piet Ploeg (left), who lost his brother, Alex, his sister-in-law and his nephew, and Anton Kotti (right) who lost his son, daughter-in-law and grandson, are interviewed at Schiphol airport, near Amsterdam, Netherlands, after attending the opening session of the trial of four men charged with murder over the downing of Malaysia Airlines flight 17. Photograph: Peter Dejong/AP Photo

In a surprise development on the opening day of the landmark Dutch court case into the downing of Flight MH17, one of four suspects charged with the murder of the airliner’s 298 passengers and crew has chosen to be legally represented – and has denied any involvement in the disaster.

Three Russians and a Ukrainian each stand accused of two offences: causing the Malaysia Airlines passenger jet to crash over eastern Ukraine on July 17th, 2014, and murdering all of those on board. As expected, none of the four appeared at the high-security Schiphol judicial complex near Amsterdam.

However, although he was not present, one of the Russian defendants, Oleg Pulatov – a former special forces soldier said to have been deputy head of intelligence with the pro-Russian breakaway Donetsk People’s Republic – has retained Dutch counsel, accompanied by a Russian lawyer.

His counsel, Sabine ten Doesschate, told the judges: “Mr Pulatov was not responsible for what happened to Flight MH17, not in any way and not in any capacity. He had nothing whatsoever to do with causing the airliner to crash. For that reason, he wishes to defend himself.”

Earlier, presiding judge Hendrik Steenhuis had opened the most complex criminal case even heard in the Netherlands, with a case file of 36,000 pages plus digital evidence, by describing the shooting down of the Boeing jet on a flight from Amsterdam to Kuala Lumpur as “almost incomprehensible”.

Addressing the relatives of the victims – some 20 of whom were present in the small courtroom, with the rest watching by video link – directly, he acknowledged that the hearings, scheduled to continue until March next year, would be “a painful and emotional period”.

Next of kin, the judge confirmed, would be afforded the right to address the court, and so far, provisionally, 49 had applied to exercise that right, 82 had asked to make written submissions, and 84 claimed compensation.

The names of all 298 of the deceased were read to the court by one of the prosecution team, Dedy Woei-a-Tsoi, a task that took a full 18 minutes and which left – as the judge noted afterwards – “a heavy silence over the courtroom”.

A second prosecutor, Ward Ferdinandusse, said the joint investigation team comprising the Netherlands, Malaysia, Ukraine, Australia and Belgium, had examined all possible causes for the MH17 crash: the possibility of an explosion on board; that it was shot down by a fighter jet; that it was hit by a missile other than a Buk; and that it was hit by a Buk missile.

The team had concluded that it was hit by a missile from a Buk unit belonging to Russia’s 53rd anti-aircraft brigade, and that the four defendants – Igor Girkin, Oleg Pulatov, Sergey Dubinsky and Leonid Kharchenko – were criminally responsible.

“They may not have pushed the button, but they took delivery of the Buk and ‘directed the employment of the weapon to serve their own interests,’” he said. Afterwards, they had “noted with delight” that a jet had been shot down.

Mr Ferdinandusse acknowledged it was “perfectly possible” that the defendants had actually intended to shoot down a Ukrainian plane, but this did not entitle them to claim combat immunity.

Outside the hearing, Anton Kotti, who lost three family members, said: “I hope the evidence leaves the judges with just one conclusion: guilty.”