Israel opposition leaders in talks to oust Netanyahu as PM 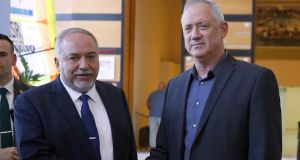 “We agree to co-operate in forming a government in order to remove Israel from the quagmire it is in and prevent a fourth election,” Mr Gantz, head of the centrist Blue and White party, said after the meeting.

It is a week since Israelis went to the polls and the outcome looks dramatically different from the picture that emerged following TV exit polls last Monday night.

Based on those projections, Mr Netanyahu was quick to embrace his wife Sara in front of the party faithful, declaring a “colossal victory against all the odds”.

According to the exit polls, Mr Netanyahu’s Likud had emerged as the largest party and his right-wing/religious bloc was projected to win 60 seats in the 120-seat Knesset, despite the fact that he was only two weeks away from the start of a serious corruption trial.

The central theme of the election was whether or not Israel’s longest-serving leader should be granted another four-year term. But after all the votes were counted, the “anyone but Bibi” camp ended up with more Knesset seats than the “only Bibi” camp.

Although Likud emerged as the largest party with 36 seats (compared with 33 for Blue and White), parties opposing Mr Netanyahu won 62 seats.

The task facing Mr Gantz now is to win the support of these parties with vastly different agendas in order to form a coalition. They are united by the desire to end the Netanyahu era, but it will not be easy.

The aim is a minority government comprising Blue and White, the left-wing Labor-Gesher-Meretz and the right-wing, secular Yisrael Beytenu, with the backing of the predominantly Arab Joint List, from outside the government.

Such a coalition could muster the support of 59 Knesset members, based on the support of 12 of the 15 Joint List members (the three members of the radical Balad faction are likely to abstain), giving a Gantz coalition one more seat than the Netanyahu bloc.

“I’m not going anywhere,” he told supporters. “Gantz, who failed at the ballot box, is trying together with Lieberman to steal the decision of masses of Israeli citizens who gave the Likud, under my leadership, a landslide victory.”

Mr Gantz and Mr Lieberman are also advancing a Bill to prevent a politician facing criminal charges, such as Mr Netanyahu, from serving as prime minister.

Mr Netanyahu said that the public will “take revenge”, prompting warnings from Mr Gantz about a civil war and a political assassination.

Fearing a coalition supported by the Joint List, Mr Netanyahu explained to a meeting of his right-wing bloc that the votes of the Israeli Arabs don’t count.