Migrant crisis shows the West still does not understand the East 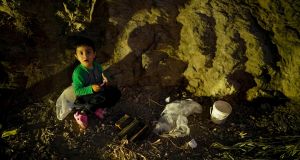 A migrant boy plays in the dirt outside the Moria camp in Greece. Photograph: Christopher Furlong/Getty Images

Despite guarded handshakes at the UN General Assembly last month, and their intention to “build a climate of trust”, Greek prime minister Kyriakos Mitsotakis and Turkish president Recep Tayyip Erdogan remain deeply cautious of anything more than cosmetic surgery on their countries’ relationship.

While the resentment of centuries of Turkish occupation of Greece may have evaporated, new sources of mutual discontent and mistrust have emerged. In reality, the past cannot be ignored, since Erdogan now demands the rescinding of the international treaties which ended Turkish hegemony, in pursuing his vision of a new Islamic empire.

Erdogan is as intransigent on Turkish expansion as Boris Johnson once appeared to be on Brexit, and for the same reason: only by playing the populist-nationalist card can he hope to hang on to power. That ambition has ruled out the possibility of Turkey as an EU member, and has pitted western ideas of statehood against more complex ethnic and religious identities and aspirations.

In such circumstances, diplomacy has little part to play, as failed UN attempts to broker peace in regions like Cyprus have shown. Cyprus is in fact a microcosm of the problem, with its Greek and Turkish citizens now divided by Turkey’s 45-year-old illegal occupation of the north of the island. As Roderick Beaton observes, “the story of the Greek nation can never be only the story of a single Greek state”, since ethnic Greek Cypriots continue to be threatened by Erdogan’s imperial intentions.

The most painful evidence of diplomatic failure is the constant influx to Greece of people seeking refuge, mostly Syrian, from the Turkish coastline. On September 27th five children drowned in an 8km stretch of sea between Turkey and Greece. This kind of tragedy is an almost everyday occurrence.

On one hand, Erdogan is committed to preventing such illegal trafficking; on the other, he threatens to lift restrictions on the migrant flow. So great is this likelihood that Greece is planning the drastic step of sealing the land border with Turkey and massively stepping up surveillance at sea.

The situation is so inhumane that, altogether, 28,000 refugees are being held in island camps intended for a maximum of 10,000. Twelve thousand are in the Moria camp on Lesbos, designed for only 3,000. Mitsotakis made the vital point at the UN General Assembly that this is the greatest migration since the second World War, and that it is a European problem requiring collective action. But humanitarian aid is not the only solution, however urgently it is needed.

The identities of the individual refugees, especially of the most vulnerable, the children, are often overlooked in the larger questions. There is more in the mind of the refugee than the single word “survival”.

As Panos Karnezis’s new novel, We Are Made of Earth, emphasises, the individual psychologies and aspirations of refugees are more complex than any rescue operation can appreciate. The 28,000 refugees are not just an unmanageable total, but 28,000 identities, each with his or her own faith, family, fears, hopes, hinterlands and prospects. A displaced person is so much more than a statistic, and in this sense the numbers just don’t add up to a solution.

The causes of the Syrian and Afghan conflicts may be local and internal, but the role of the major players on the sidelines underlines the continuing incomprehension between East and West. Today, the EU, the US and Nato join Greece in warning Turkey, not for idealistic or ethical reasons but because of the military and economic issues at stake.

Greek independence came about in the 19th century because liberal thinkers saw a nation state on western principles as the future for the then stateless Hellenic people. This defining moment was the first attempt, which continues today, to westernise all of Europe. Greece is living with the consequences of being taken from the East and donated to the West. Reading between Mitsotakis’s lines, he was saying: “If you want us to be western, then you must acknowledge our borders as your borders, our problem as your problem.”

The refugee crisis is increasing our awareness of the East-West situation: the crisis is Middle Eastern in origin, but the solution is believed to be in the West. This, however, obscures the fact that where it is happening, in Greece, is both East and West. The dilemma in the Balkans is symptomatic of this dichotomy between the West’s idea of the East and the East’s perception of the West.

Given that the main focus of the UN assembly was climate change, maybe it wasn’t the best place to announce a “climate of trust”. That, too, can change, and change dramatically. But change, of whatever kind, comes too late for those five drowned children.