Coronavirus: Global deaths near 1m as Melbourne hopes for move to ‘Covid normal’ by Christmas 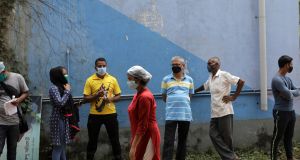 More than 33.1 million cases of coronavirus have been recorded worldwide with more than 998,000 deaths, according to the latest data from Johns Hopkins University.

India’s confirmed coronavirus tally has reached six million cases. The health ministry reported 82,170 new coronavirus cases in the past 24 hours, driving the overall tally to 6,074,703. At least 1,039 deaths were also recorded in the same period, taking total fatalities up to 95,542. New infections in India are currently being reported faster than anywhere else in the world. The world’s second-most populous country is expected to become the pandemic’s worst-hit country in coming weeks, surpassing the US, where more than 7.1 million infections have been reported. In the past week, nearly one in every three new infections reported in the world and one in every five reported coronavirus deaths came from India, according to data from Johns Hopkins University. While most of India’s deaths remain concentrated in its large cities, smaller urban centres across the country’s vast landscape are also reporting a surge in infections. Yet even as infections mount, India has the highest number of recovered patients in the world. More than five million people have recovered from Covid-19 in India and the country’s recovery rate stands at 82 per cent, according to the health ministry. Health experts have warned about the potential for the virus to spread during the upcoming religious festival season, which is marked by huge gatherings of people in temples and shopping districts. Another potential risk is an upcoming election in eastern Bihar state, where nearly 72 million people will cast votes on three days beginning next month.

Australia’s city of Melbourne, its hotspot in the second wave of coronavirus infections, is on track to return to near normal by Christmas, strengthening hopes for major summer sporting events to go ahead amid a general economic revival. Southeastern Victoria state recorded a single digit rise in new cases for the first time in three months on Monday, with the lifting of some of the toughest curbs in its capital of Melbourne, such as a night-time curfew, premier Daniel Andrews said. “That is a very, very significant set of numbers. We are well ahead of schedule,” Mr Andrews told a daily news conference, anticipating a move to “Covid normal”, with most curbs eased.

The cumulative death toll reached 31,411 from 31,232 on Friday. Daily deaths are now around their highest levels since early May but are well below the late March record of nearly 900.

Chancellor Angela Merkel told leaders of her Christian Democrats (CDU) on Monday that coronavirus infection rate could hit 19,200 per day in Germany if the current trend continues but stressed that the economy must be kept running, a party source said. Infections have been rising in Germany for weeks. Data from the Robert Koch Institute (RKI) for infectious diseases showed the number of confirmed coronavirus cases in Germany rose by 1,192 on Monday. The case load has leapt by more than 2,000 on some recent days. “If the trend continues as it is now, we’ll have 19,200 infections a day. That’s like in other countries,” Dr Merkel told a videoconference of the CDU leadership, Bild newspaper said. A person with knowledge of the conference confirmed this to Reuters, adding that the chancellor had based the number on projections and was referring to the period up to Christmas.

The UK government has reported that, as of Monday morning at 9am, there had been a further 4,044 lab-confirmed cases of coronavirus in the country, taking the overall number of cases confirmed to 439,013.

The UK fovernment also said a further 13 people had died within 28 days of testing positive for Covid-19 as of Monday, bringing the UK total to 42,001.

Separate figures published by the UK’s statistics agencies show there have now been 57,600 deaths registered in the UK where Covid-19 was mentioned on the death certificate.

The UK is preparing to enforce a social lockdown across much of northern Britain and potentially London amid a second wave, the Times of London reported.

On Monday, a UK health minister refused to rule out more restrictions, even as lawmakers pushed back against allowing the government unfettered power to introduce new curbs.

A Conservative Party rebellion against Boris Johnson’s emergency coronavirus powers is gaining momentum after opposition parties signalled their support. The House of Commons plans a vote on Wednesday on renewing legislation that allows ministers to impose new rules to combat the pandemic without first seeking parliamentary approval. But a growing band of Tory rebels want to amend the law to put a check on the government’s power.

On Monday, health minister Helen Whately didn’t deny that more restrictions may be in the offing, telling Sky News on Monday only that ministers “don’t want” to bring them in.

Moscow has started to reopen temporary hospital wards after daily coronavirus infections in the Russian capital soared. The region reported 2,217 new cases of Covid-19 in the last day, with the number of daily infections up 3.5 times since the start of September.

City hall ordered eight hospitals in the capital, which is the epicenter of the virus in Russia, to reequip themselves to handle patients by early next week, the Interfax news service reported. Moscow began demobilising its temporary wards in late May.

The number of tests coming back positive for Covid-19 is topping 25 per cent in several states in the US midwest as cases and hospitalisations also surge in the region, according to a Reuters analysis. North Dakota’s positive test rate has averaged 30 per cent over the past seven days compared with 6 per cent the prior week. The rate has risen to 26 per cent in South Dakota from 17 per cent the previous week, according to the analysis using testing data from The Covid Tracking Project. Minnesota and Montana are averaging 7 per cent of tests coming back positive, but Montana’s positivity rate rose on Sunday to 20 per cent, according to the analysis.

The largest city in Brazil’s Amazon has closed bars and river beaches to contain a fresh surge of coronavirus cases, a trend that may dash theories that Manaus was one of the world’s first places to reach collective, or herd, immunity. University of Sao Paulo researchers suggested that a drastic fall in Covid-19 deaths in Manaus pointed to collective immunity at work, but they also believe that antibodies to the disease after infection may not last more than a few months. Local authorities on Friday enforced a 30-day ban on parties and other gatherings, and restricted restaurant and shopping hours, a setback for the city of 1.8 million after the worst of the pandemic seemed to be behind them.

Hong Kong’s latest coronavirus wave is showing signs of subsiding after months of social-distancing measures, posting single-digit increases in daily confirmed cases for seven of the last eight days. That has pushed the rolling seven-day average daily infection rate down to about five, the lowest since the end of June and well before the start of the current surge of infections.

Beijing’s city government is requiring companies to stop importing frozen food from countries with serious coronavirus outbreaks, according to a statement on the local commerce bureau’s website. The statement didn’t name any nations. The city’s move is the latest restriction on imports in China. The nation has been investigating imported meat, seafood, packaging and containers as a potential source of Covid-19 since June.

Thailand’s Covid-19 task force, which is chaired by prime minister Prayuth Chan-Ocha, agreed to extend a nationwide state-of-emergency for one more month through October 31st, according to deputy premier Wissanu Krea-Ngam. The move, which needs Cabinet approval, will be the sixth extension since Thailand’s first order in March.

The task force also approved a special tourism visa that will be effective from October 1st, according to tourism minister Phiphat Ratchakitprakarn.

South Korea added 50 more coronavirus cases in 24 hours, down from 95 a day earlier and the fewest in seven weeks. The country’s total death toll rose by five to 406. South Korea has been fighting a flare-up in cases that peaked last month at more than 400 in a single day.

French health minister Olivier Veran rejected the idea of a preemptive, three-week lockdown to enable people to spend Christmas together.

“We don’t want to bring the economic, social, cultural, sports and family life of the French people to a complete standstill,” he said on LCI television. “That’s why we take decisions that are adapted to the seriousness of the moment, region by region.”

He said the government still aims for people be able to spend the end-of-year holidays with their families.– Agencies