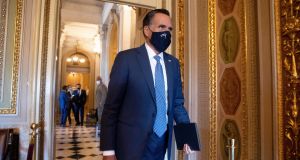 Senator Mitt Romney, one of the few vocal Republican critics of the president, said he intends “to follow the constitution and precedent in considering the president’s nominee”.

His comments were a blow to Democrats who had hoped that Mr Romney and others could stymie Republican senate leader Mitch McConnell’s efforts to proceed with a confirmation hearing, despite the senate majority leader blocking former president Barack Obama’s court nominee four years ago because it was an election year.

Only two Republican senators – Susan Collins of Maine and Lisa Murkowski – have voiced opposition to holding a vote before the election on November 3rd. With Republicans controlling 53 seats in the 100-member senate, Mr McConnell appears to have the requisite votes to confirm Mr Trump’s nominee, a vote that would likely cement the conservative majority on the bench for decades.

Mr Trump confirmed that he will name Ms Ginsburg’s successor on Saturday at the White House, after memorial services for the late justice have taken place at the supreme court and US Capitol.

The president met leading contender Amy Coney Barrett on Monday. The 48-year-old Indiana native was considered by the president two years ago to fill the vacancy that arose from Justice Anthony Kennedy’s retirement, but ultimately he chose Brett Kavanaugh, whose nomination was mired in controversy over sexual assault allegations.

The fact that Ms Coney Barrett has already been vetted by the White House is adding to speculation that she will be named as Mr Trump’s choice, but Barbara Lagoa, the first Hispanic woman appointed to the Florida Supreme Court, is also in the running.

The death of Ms Ginsburg, a champion of gender equality and the standard bearer for liberal voices on the nine-member court, has injected a new dynamic into the US presidential election less than six weeks before polling day. Should Mr Trump’s nominee to succeed her be approved by the Senate this year, the most enduring legacy of the first term of the Trump presidency will be a 6-3 conservative majority on the supreme court.

Asked yesterday if Mr Trump stood by his previous assertion that he would only nominate judges who would overturn Roe V Wade, the 1973 ruling that established a woman’s right to abortion, White House press secretary Kaleigh McEnany said the president’s priority was to appoint a textualist, who would interpret the constitution as written.

While it is now virtually certain that Mr McConnell will proceed with a confirmation hearing, he has not clarified if this will take place before November 3rd or during the “lame duck” session between election day and January.

Approximately 52,000 new infections were reported in the US on Monday alone, while more than 20 states have reported more Covid-19 cases this week compared to last week.

Speaking at a campaign rally in Ohio on Monday night, Mr Trump claimed that “virtually nobody” below the age of 18 had been affected by the virus, a remark that was lambasted by Democrats on Tuesday.

He also used his address to the United Nations General Assembly to declare that the US had launched “the most aggressive mobilisation since the second World War” in tackling Covid-19.

“We will distribute a vaccine, we will defeat the virus, we will end the pandemic, and we will enter a new era of unprecedented prosperity, cooperation, and peace,” he declared.