March for our Lives: Major anti-gun rallies sweep US

Citizens from across the country gather near White House, heading towards the US Capitol 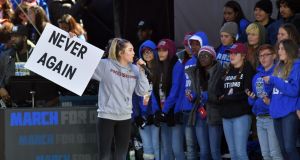 Singer Miley Cyrus calls for action on gun control during the March for Our Lives Rally in Washington, DC on Saturday. Photograph: Mandel Ngan/AFP/Getty Images

Hundreds of thousands of demonstrators have taken to the streets of the US capital to call for tighter gun laws in one of the biggest mass protests seen in recent years.

Teachers, students and citizens from across the country gathered from shortly before noon near the White House, making their way towards the US Capitol.

In the warm spring sunshine, thousands of people gathered to hear students of the Marjory Stoneman Douglas High School in Florida, survivors of gun crime and anti-gun activists tell their stories in the hope of changing US gun laws once and for all.

Among those who addressed the crowd was David Hogg, the Parkland school student who has become a de facto spokesman for the movement that has swept across America since the February 14th massacre which left 17 people dead.

Mathew Soto, whose sister was killed in the 2012 Sandy Hook massacre, told the crowd: “We cannot change the past. We can only fight to change and build a better future.”

Zion Kelly, a DC student whose brother Zaire was shot in an armed robbery in Washington last year, also spoke from the stage. “Today, I raise my hand in honour of my twin brother,” he said, holding back tears.

Ryan Deitsch, a student at Parkland High School, described how February 14th , the day of the Parkland massacre, was his sister’s birthday.

“She had to spend that birthday huddled under a desk…hoping she was going to make it home that day,” he said, describing how she was one of the lucky ones.

He continued: “We need to arm our students with the facts, the knowledge, the education they need to enter the real world.”

Arm me with books

Among those attending the march was Catherine Morrissi, an eighth grade teacher from Virginia. Holding a sign with the words: “Arm me with books, not bullets,” she said she believed America was reaching a turning point. “We have been so moved by the voice of these kids, these young people. I think for the first time, politicians are beginning to realise that this country has had enough.”

Interspersed through the crowd, which passed in front of the Trump International Hotel near the White House, hundreds of homemade and printed placards were held aloft. “The NRA has blood on its hands,” read one. “It could have been your child,” says another.

Two Jewish brothers held a homemade sign saying: “Kids are not Targets” as they stood beside their mother and grandmother.

Speeches from survivors of gun crime were interspersed with performances from stars including Ariana Grande and Miley Cyrus, who held a sign stating: “Never Again.”

While earlier in the day President Donald Trump tweeted his condolences to the victims of yesterday’s attack in France, he made no mention of the rallies in DC and elsewhere. Mr Trump is spending the weekend at his home in Mar-a-Lago in Florida.

Similar demonstrations are being held across the country and further afield on Saturday, with up to 800 events scheduled worldwide according to the organisers of the event.

The March for Our Lives movement emerged from the Parkland school tragedy last month – the third mass shooting to take place in the United States in five months, following two such shootings in Las Vegas and Sutherland Springs, Texas late last year.

The Parkland attack – the deadliest school shooting since Sandy Hook in 2012 – has prompted renewed calls for gun control measures. In particular, focus has turned to the availability of military-style assault weapons, such as the AK-15 style gun used by the Parkland killer, and which was purchased legally by the 19-year-old suspect.

In the wake of the shooting, the Florida state legislature passed new gun laws, including a provision to raise the minimum age for buying an assault weapon to 21. But progress has been slow at federal level.

Modest gun control measures were included in the $1.3 trillion spending package passed by Congress this week. The measures include $50 million in grants for schools to help prevent gun violence, and improvements to the background check system.

In the five weeks since the Parkland shooting in Florida, the Parkland students have galvanised a national movement, breathing new life into the call for gun law reform and rejecting the conservative orthodoxy of the powerful gun rights lobby spearheaded by the NRA.

They have already successfully lobbied for substantial reform in Florida after decades of inaction, and led thousands of students in school walkouts around the US earlier this month.

Organisers expected Saturday’s rally in Washington to draw half a million people – a crowd comparable to the Women’s March in January last year and the anti-Vietnam war protests of the 1960s.

Cassie Pearce (17), had ridden in her school bus for 10 hours from Manchester, Vermont with dozens of her classmates. Clutching a sign that said “I should be writing my college essay, not my will,” Pearce said: “I’m here because enough is enough. We have a right to be heard. We don’t want to be killed in school.”

Sophia Hiltz and Alanis Moulier, both 16, had not travelled as far, but just a day ago their close friend Jaelynn Willey, had died in gun violence at another American high school - Great Mills high school in Maryland.

Willey was killed by a student who brought a handgun on campus and opened fire. It was at least the 33rd time a gun was fired at an American school this year, according to Everytown for Gun Safety.

‘We will not stop’

“I saw her fall,” said Moulier. “It shows it can happen to anyone, anywhere. It just happens.” Hiltz said: “Something needs to be done, and if it doesn’t change we will keep doing what we’re doing. We will not stop.”

Hundreds of students from Great Mills marched together, wearing green and carrying signs with Jaelynn’s name and face.

In a meeting with politicians in the aftermath of Parkland, the president had signalled support for stronger background checks on gun purchases and raising the minimum age for buying high-powered rifles. But the NRA staunchly opposed these measures and Trump appears to have abandoned the proposals.

On Saturday morning, shortly before the speakers – all of whom were expected to be teenagers – took the stage in Washington, the White House issued a statement applauding “the many courageous young Americans exercising their first amendment rights”.

The administration also drew attention to minor reforms the president has called for, including a move by the justice department on Friday to ban bump stocks, the accessory that allows rifles to mimic the rapid fire of automatic weapons.

A group of student journalists from the Stoneman Douglas newspaper, the Eagle Eye, were invited to guest-edit the Guardian’s US website this weekend. Eleven students covered the rally in Washington, interviewing other survivors of gun violence from Stoneman Douglas and elsewhere.

Parkland student Jordan Khayyami (15), said: “I think that legislatures should be aware that the next generation of voters is right in front of them so if they don’t want to promote change then we will vote for change.”

Robert Runcie, the Broward County schools superintendent who administers the district Stoneman Douglas is part of, said: “Stoneman Douglas students have driven and impacted a dawn of a national movement. I think this generation may prove to be the greatest generation.”

The scenes of thousands of students on the streets was overwhelming to many of the victims of gun violence who attended the Washington rally.

“I did not expect this. I’m still astounded,” said Mark Barden, whose seven-year-old son Daniel was one of the 20 children murdered at Sandy Hook in 2012. “To me, it looks like our entire nation is finally on board, on the right side of this issue. It’s so inspiring and encouraging and overwhelming, and beautiful to me.”

He said the rally in Washington was “like nothing I’ve seen, ever, to be honest with you. It’s got a different tone and different feel.”

Barden lauded the young activists now leading the movement. “They’re young enough not to be intimidated or bullied by the status quo, or lawmakers or are locked up in the pocket of corporate greed. I think they don’t care about any of that.” – Additional reporting: Guardian