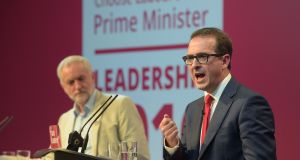 Mr Smith, who challenged Mr Corbyn for the party leadership in 2016, wrote an article in the Guardian urging his party to reopen the question of whether Brexit was the right thing for Britain.

Sources close to the Labour leader said Mr Smith was not a team player and had repeatedly breached shadow cabinet collective responsibility on Brexit, by advocating single market membership.

In the article, Smith said his party could only “serve democracy” by recommending a poll on the Brexit deal. “Labour needs to do more than just back a soft Brexit or guarantee a soft border in Ireland,” he said.

Just been sacked by @jeremycorbyn for my long held views on the damage #Brexit will do to the Good Friday Agreement & the economy of the entire U.K. Those views are shared by Labour members & supporters and I will continue to speak up for them, and in the interest of our country.

“Given that it is increasingly obvious that the promises which the Brexiters made to the voters, especially but not only their pledge of an additional £350 million a week for the NHS, are never going to be honoured, we have the right to ask if Brexit remains the right choice for the country. And to ask, too, that the country has a vote on whether to accept the terms and true costs of that choice once they are clear,” he wrote.

He will be replaced by Tony Lloyd, the shadow housing minister, who returned to parliament in 2017 after an unsuccessful attempt to become Labour’s mayoral candidate for Manchester.

Demanding a second referendum was the most distinctive policy position on which Mr Smith fought his leadership bid.

He was convincingly defeated by Mr Corbyn, but his views may chime with the party’s pro-remain base. When polled, members are strongly in favour of remaining in the single market and the customs union – and many would like to see Brexit stopped.

Mr Corbyn has repeatedly insisted it is not Labour’s policy to offer voters a chance to consider the final Brexit deal at the ballot box – though he argues that if Theresa May loses the key vote in parliament on the agreement she would have little choice but to call a general election.

Mr Smith said remaining in both the customs union and the single market was the only way of preventing what he warns would be the “hardest ever” border in Ireland.

He said: “The damage a disorderly and ill-thought-out Brexit could do in Ireland is enormous. We are often told Brexit threatens to ‘reimpose’ a so-called hard border on the island of Ireland, but that understates the problem. Because the economic border that a hard Brexit would create on Ireland would be the hardest ever.” – Guardian