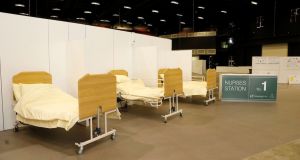 Preparations are under way for an isolation and step-down facility at the Conference Centre at Citywest Hotel, Dublin. Photograph: Leon Farrell/ PA Wire

Some 800 additional nurses and midwives have registered to practise here in the past two weeks, bringing the active number on the Irish Nursing and Midwifery Register to its highest ever level.

The register has surpassed 78,000 active nurses and midwives for the first time, following a surge of applications from healthcare workers looking to help tackle the coronavirus outbreak in the State.

Some 540 nurses and midwives applied to return to active service following a recent decision to waive the re-registration fee in light of the pandemic.

Some 139 doctors have also applied to re-register with the Medical Council over the past two weeks. Half of those doctors are re-registering to practise in Ireland after working abroad, while the other half are coming out of retirement or returning to medicine from a different field.

Confronting Coronavirus · Why did it take so long for a nursing home plan to be put in place?

“The figure only includes those who were not active on the register. If a doctor still had their registration up to date but were outside the jurisdiction, they do not have to re-register,” a spokesman for the Medical Council said.

This figure would also not include doctors returning to practise medicine who remained on the register while working in academia, on research, or who were semi- or fully retired, he said.

The Health Service Executive (HSE) said 60,000 people responded to a call for healthcare workers to assist in the response to the crisis.

This figure includes healthcare workers who have left the field, retired, are working outside of the public system, or who were working abroad. The HSE said it had begun a recruitment process including interviews and professional registration checks on March 20th.

A spokeswoman for the HSE confirmed the figure also included people who were not healthcare professionals, and it was “seeking people with various skill sets” in its recruitment campaign.

1 Covid-19: Two-week quarantine period for arrivals into State could be lifted for some
2 Irish planning for no-deal Brexit to restart as EU-UK talks go badly
3 Miriam Lord: Taoiseach is trapped in a Zoom session from hell
4 Trump announces clampdown on social media companies
5 The momentum behind calls to ease lockdown may become irresistible for politicians
Real news has value SUBSCRIBE