Coronavirus: British government admits it must ramp up testing 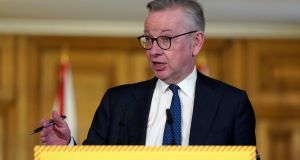 British authorities have admitted that the country must step up its testing for coronavirus and improve the delivery of personal protective equipment (PPE) to frontline staff in the National Health Service (NHS). Cabinet office minister Michael Gove said that testing, which has lagged far behind some other European countries, was being increased across Britain.

“More NHS staff are returning to the frontline, and more testing is taking place to help those self-isolating come back, and to protect those working so hard in our hospitals and in social care. But while the rate of testing is increasing, we must go further, faster,” he said.

Deputy chief medical officer Jenny Harries claimed it was not possible to properly compare the efficacy of Britain’s level of testing of around 10,000 a day to Germany’s of about seven times that. But she admitted that Britain was struggling to supply doctors, nurses and paramedics with the protective equipment they need.

“Distribution has been a little tricky at times so we have now taken a whole strand of the logistics, including with army support, out so we are developing a UK position on stock and transfer flow,” she said.

Mr Gove and Dr Harries were speaking in Downing Street after Britain recorded its biggest increase in deaths due to the disease in a single day, with 381 new fatalities bringing the death toll to 1,789. Tuesday’s figure was more than twice the number of deaths the previous day, when 180 were recorded.

Statistics from the Office for National Statistics (ONS) published on Tuesday suggested that the actual death toll in Britain could be almost 25 per cent higher than the figure reported by the NHS.

The ONS figures include people who died in care homes or at home for whom coronavirus was among the causes of death listed on a death certificate. The ONS figure for England and Wales up to March 20th is 210, 24 per cent higher than the 170 recorded by the NHS.

Stephen Powis, medical director for NHS England, said deaths were likely to continue to rise in the coming days but that social distancing measures appeared to be helping to reduce the number of new infections.

“This demonstrates that people are paying attention and understand the message that we are giving,” he said.

Jeremy Corbyn has called on the government to seek an extension to the post-Brexit transition period beyond December 31st, something Downing Street has repeatedly ruled out. The Labour leader, whose successor will be announced on Saturday, said Britain should retain its current trading and regulatory arrangements with the EU while it was dealing with coronavirus.

“If nothing else, this has shown the interdependence of near-neighbour countries and the importance of that,” he told the BBC’s Jeremy Vine Show.