European Commission rejects claims English will not be EU language

‘Any change to EU language regime subject to vote of the Council,’ says Commission 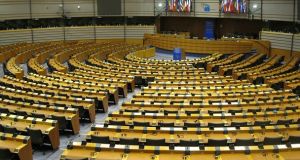 Irelan’d MEPs might soon have the opportunity to conduct their parliamentary business through Irish as a result of Brexit. Photograph: Getty Images

Irish MEPs might have to brush up on their Irish language skills after it was claimed that English would no longer retain its status as a working language in the EU following the Brexit referendum vote.

“English is our official language because it has been notified by the UK. If we don’t have the UK, we don’t have English,” Polish MEP and chair of the European Parliament’s constitutional affairs committee Danuta Hübner told a news conference on the legal consequences of the British referendum to leave the EU on Monday.

A statement issued on behalf of the European Commission Representation in Ireland rejected Ms Hübner’s claim.

The European Commission Representation said it “noted” the report that English would cease to be an official language of the EU but said it was “incorrect”.

“The Council of Ministers, acting unanimously, decide on the rules governing the use of languages by the European institutions. In other words, any change to the EU Institutions’ language regime is subject to a unanimous vote of the Council, including Ireland,” the statement said,

In 1958, the then European Economic Community named Dutch, French, German and Italian - the languages of the first six countries to join the organisation - as its official languages.

While Irish received full status in the EU in 2007 it remained marginalised due to a derogation which meant that EU institutions were not obliged to provide full translation services in the language.

The Government announced last year that it would apply to the EU council of ministers for an end to the derogation and Irish is now due to become a fully fledged official working language by 2022.

Ms Hübner said under EU rules member states can notify only one official language each which means that Malta or Ireland cannot also request English as an official language without first making a change to EU rules which would require a unanimous decision in the EU Council.

However, she was confident such a change could take place.

“I personally believe that we will find unanimity to change the rule on this ... and then we will have from the Irish not only Gaelic but also English or from the Maltese not only Maltese but also English,” she said.

Ms Hübner is not alone in her view that a Brexit might have implications for the English language as a working language in Europe. French Jean-Luc Mélenchon leftwing MEP and French presidential candidate tweeted on Monday that “English can no longer be the third working language of the European Parliament”

Some of Ireland’s 11 MEPs would have to brush up on their language skills if they were to work through the medium of Irish but others, including Ireland South MEPs Seán Kelly and Liadh Ní Riada, would have no such problems.

Mr Kelly is a fluent Irish speaker while native speaker Ní Riada went on a stailc teanga or language strike for a week during Seachtain na Gaeilge last year in protest at the derogation and the exclusion of the Irish language within EU institutions.

Those MEPs who wish to practice their Irish are in luck however as they will be joined in Europe by 62 Irish-language translators and 14 language assistants once the Department of Arts, Heritage and the Gaeltacht and the European Personnel Selection Office complete a recently advertised recruitment drive brought about by the end of the derogation.