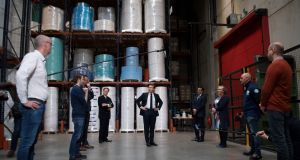 Until they were laid low by the coronavirus pandemic, few in Europe or the United States realised how much their countries depended on vital healthcare supplies from Asia.

When disaster struck, western governments were forced to go to outrageous lengths to secure such supplies, often by shafting long-standing allies.

In France, for example, the reserve of surgical face masks stood at 140 million, down from a billion a decade earlier. Healthcare professionals are supposed to change masks at least every four hours.

During a visit to the main manufacturer of FFP2 surgical masks in France, the Canadian-owned Kolmi-Hopen factory near Anger, President Emmanuel Macron said officials had based decisions on “the certainty that high-quality masks produced on the other side of the world could be imported easily, so there was no reason to stock them massively”.

France and Europe have learned their lesson, Macron insisted. “The day after will not resemble the days before. We must rebuild our national and European sovereignty.”

“Nobody was ready, anywhere in the world,” says an adviser to Macron. In the short term, every country is maximising whatever national production capacity it can salvage, and scrambling to buy from China. Once the crisis passes, “the EU must protect strategic sectors, bring back certain industries, increase our capacity to manufacture and stock in the fields we neglected for decades, such as medicine”.

About 80 per cent of the active substances in French medicine are manufactured abroad, mainly in China and India. “We will soon be short of essential medicines to treat Covid-19 patients in intensive care units,” directors of nine large European hospitals warned in Le Monde at the end of March.

Three categories of medicine – hypnotic drugs, anaesthetics and tranquillisers – are essential for treating Covid-19, according to doctors interviewed by Radio France.

Patients in intensive-care units often develop secondary infections in the lungs, for which they need antibiotics, Jean-Pierre Thierry of France Assos Santé said. “Usually, there are plenty of antibiotics, but there are practically no factories producing them outside China and India.”

Ninety per cent of the world’s supply of penicillin, used in antibiotics, is produced in China. India, which is also suffering from the pandemic, has limited exports of 26 medicines and active substances.

French doctors have substituted old reliables, such as Valium, for drugs that are in short supply. They are experimenting with lower doses, to conserve stocks. Some advocate using veterinary sedatives. Macron announced he had placed “massive orders” to swell reserves.

The mask shortage has been felt most acutely, not only in France. “Despite warnings from experts for decades, especially after the near miss of [the 2002-2004 epidemic of] Sars, we still weren’t prepared for this pandemic, and we did not ramp up domestic production when we could, and now there’s a mask shortage,” wrote New York Times columnist David Leonhardt.

About 7,000 Chinese factories now manufacture surgical masks, up from 4,000 before the pandemic. According to official figures, the People’s Republic quintupled mask production in February. The Chinese car manufacturer BYD set up the world’s largest mask assembly line and is producing 10 million daily, Le Monde reported. Chinese manufacturers of smartphones and protection pads for incontinence have also converted to mask production.

French industry is also scrambling to adapt to the pandemic. Kolmi-Hopen, which Macron visited, increased its workforce by 50 per cent and is operating 24/7. By late April, it will have increased production from 3.3 million to 10 million masks weekly – still only a fraction of the billion masks that France has ordered from China.

Air Liquide, the main French manufacturer of ventilators needed to treat Covid-19, is in the process of increasing production from 200 to 10,000 per month. Engineers from the Schneider Electric company, PSA and Valeo are converting production lines previously devoted to electrical equipment and the manufacture of cars to help make ventilators.

Macron previously campaigned for European sovereignty in industries of the future, such as artificial intelligence and renewable energy. The pandemic has shifted the focus to traditional, basic industry.

Jobless workers from the last factory that made oxygen bottles in Europe, at Clermont-Ferrand, are campaigning for it to reopen, because the bottles are needed for respirators. The factory was owned by the British group Luxfer.

Former employees of an FFP2 surgical mask factory at Plaintel, in Brittany, also hope that the crisis could bring their jobs back. Their factory was purchased by the American group Honeywell in 2010. The Americans shut down the factory and sold its machines as scrap in 2018, when remaining production was outsourced to Tunisia.

Both the oxygen and surgical mask factories were profitable. They just were not profitable enough for their British and US owners.