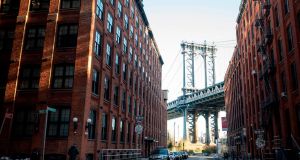 The US now has more confirmed cases than any other country – more than 335,000. Photograph: Johannes Eisele/AFP via Getty Images

Italy recorded its lowest number of new coronavirus deaths in three weeks on Sunday, saying 431 people died in the past day to bring its total to 19,899. It was the country’s lowest day-to-day toll since March 19th.

For the ninth day running, intensive care admissions were down and hospital admissions overall were down.

More than 4,000 people tested positive as Italy began its fifth week under nationwide lockdown, continuing a general flattening in its infection curve.

But officials have noted that Italy has also increased its testing capacity in recent days, yielding more positive cases but allowing for more effective quarantine measures for people once they know they are infected.

Italy crossed the one million virus test mark on Sunday, doubling the number of tests since the end of March. Overall, 156,363 people have been confirmed as positive, although officials note that the true number of infected could be as much as 10 times that, particularly in hard-hit Lombardy.

New coronavirus infections in Spain have fallen to a record low since the outbreak commenced as Europe’s worst-hit country braced for the reopening of some sectors of its economy this week.

As of April 6th, more than 1.25 million people have been infected in more than 180 countries, according to the Johns Hopkins University Center for Systems Science and Engineering.

There have been over 69,500 deaths globally. Just over 3,200 of those deaths have occurred in mainland China. Italy has been worst affected, with over 15,800 fatalities, and there have been over 12,600 deaths in Spain. The US now has more confirmed cases than any other country – more than 335,000. Many of those who have died had underlying health conditions, which coronavirus complicated.

More than 264,000 people are recorded as having recovered from the virus.

Deaths in Spain increased slightly to 619 in the past 24 hours and were likely to exceed 17,000 on Sunday, but Spanish health ministry figures showed new cases had grown by 2.6 per cent over the same period – the lowest rate since the pandemic took off in the country a month ago and caseloads started increasing by one-fifth every day.

Evidence that a strict lockdown, in place since March 14th, was working came as some factory and construction owners prepared to return to work on Monday, a call that has drawn criticism in some quarters.

The country’s health minister said the ban on all non-essential work was a temporary measure intended to relieve pressure on overstretched intensive care units. Those returning to work were being advised to maintain social distancing and facemasks will be handed out in metro and rail stations.

In a letter to the prime minister, Pedro Sanchez, Catalonia’s regional president asked to see the medical and epidemiological advice on which the decision was taken. Quim Torra, also suggested that the move would provoke “a rise in infections and a situation of collapse for Catalonia’s health system”.

The World Health Organisation has said there could be a “deadly resurgence” of coronavirus, also known as Covid-19, if countermeasures are lifted too soon, while one of the Spanish government’s own experts has said he thought it would have been sensible to keep non-essential workers at home for longer.

Mr Sanchez has warned that the lockdown is likely to be extended beyond 26th April. Under the rules of confinement, people are allowed to leave their homes only to got to work or to buy food or medicine.

Optimism over Spain’s slowing infection rates was tempered by continuing speculation the actual number of Covid-19 deaths in the country is much higher than official figures.

Recently released data from judicial authorities in Madrid, for example, suggest that 6,600 more people than usual died in the last two weeks of March, compared with the official tally of 3,500 Covid-19 deaths in the region.

Infection rates continued to decelerate elsewhere in Europe including the Netherlands, where coronavirus cases topped 25,000 on Sunday with more than 2,700 deaths.

The European commission chief, Ursula von der Leyen, told the German daily Bild that elderly people on the continent may need to remain isolated until at least the end of the year to protect them from the virus, even if freedom of movement is relaxed for others.

“Without a vaccine, we have to limit as much as possible contact with the elderly,” she said. “I know it’s difficult and that isolation is a burden, but it is a question of life or death, we have to remain disciplined and patient.

“Children and young people will enjoy more freedom of movement earlier than elderly people and those with pre-existing medical conditions,” she said.

In an Easter Sunday mass performed to a handful of people in St Peter’s Basilica and livestreamed around the world, Pope Francis said he hoped that rivalries from before the second world war “do not regain force” as a result of the pandemic. He said the crisis presented the European Union with an “epochal challenge, on which will depend not only its future but that of the whole world”.

Tight restrictions on movement came into force on Sunday in Jerusalem, where predominantly ultra-Orthodox Jewish areas have been hit disproportionately by the virus, in part because influential rabbis were slow to shut synagogues and religious seminaries.

Mainland China reported 99 new cases on Saturday, of which all but two were imported, and the country’s national health commission said there were no new deaths.

The two local cases were in Heilongjiang, China’s northern-most province, which borders Russia. Of the 97 imported cases recorded, 43 were in the city of Shanghai. There were no new cases reported in Hubei, the province where the outbreak is believed to have begun and was officially announced 103 days ago. – Guardian