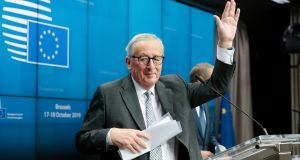 Outgoing president of the European Commission Jean-Claude Juncker earned a round of applause from the hardbitten hacks. Photograph: Olivier Hoslet/EPA

The failure of the EU leaders to agree to opening EU accession talks with North Macedonia and Albania was a “mistake of historic proportions”, European Commission president Jean-Claude Juncker said on Friday night.

Speaking to journalists at the end of the EU summit, which had demonstrated remarkable unity in approving a Brexit deal, Mr Juncker blasted a small minority of member states, led by France, that had blocked the accession decision. He was joined by European Council president Donald Tusk in a similar vein.

The accession debate took place at dinner on Thursday and extended into the early hours.

“The commission reports are . . . clear that both these countries did what they were asked to do. And the adoption of the Prespa Agreement [renaming North Macedonia to end a long-running, bitter dispute with Greece] was a truly extraordinary achievement,” Mr Tusk said.

“So both countries have the right to start EU negotiations as of today. They are ready. Unfortunately, a few member states are not ready yet. This is why we didn’t manage to reach a positive decision. Personally, I think it was a mistake.”

“Today I would like to send a message to our Macedonian and Albanian friends,” he added. “Please do not give up. I fully understand your frustration because you did your share and we haven’t ... But I have absolutely no doubt that one day you will become full members of the EU.”

The decision will be deeply disappointing in Skopje and Tirana, where political leaders have staked much on the EU promise. Supporters in the region warn that the decision could be destabilising.

Taoiseach Leo Varadkar said he regretted the decision, which was not about immediate accession, but the beginning of a lengthy process. Promises had been made to both countries that were not being honoured, he said.

The EU leaders’ discussions reopened on Friday morning on the multi-annual budget for 2021-2027, which have barely moved beyond square one – a statement of aspirations, that despite the €12 billion Brexit hole, existing programmes like Cap and cohesion funding must be preserved intact, funds must be added to research and science, and new programmes on border controls and climate change added. It is a circle that will not square.

The unity of purpose so visible in the Brexit debate was sorely lacking.

The Finnish presidency was asked to prepare a paper of broad options on the overall scale of the budget, and has done so controversially, proposing what would be extensive cuts. Central to the problem is the reality that more than 75 per cent of funding is contributed by member states from their budgets.

To maintain existing spending, the budget needs to increase overall by more than 10 per cent to 1.1 per cent of community GNI (gross income). The presidency, reflecting the budgetary perspective of the richer net contributor states who will be asked for more, is suggesting an increase in the range of 1.03-1.08 per cent of GNI. (Every tenth of 1 per cent of GNI represents some €17 billion in extra spending).

The commission and MEPs have set their proposed increases higher at 1.11 and 1.3 per cent GNI respectively. Ireland, now a net contributor, is being careful to hold its cards tight until it gets a sense of the likely shape of the Cap budget.

The summit was supposed to provide “guidance” to the presidency and commission on realisable big-picture figures.

Had it done so, Mr Juncker was asked? “No,” the president replied. The meeting had been no more than a “stocktaking” of known positions, he said.

The summit “conclusions” call on the presidency “to submit a negotiating box with figures ahead of the European Council in December”. To the concern of the commission, the prospect by then of reconciling widely different interests for the required unanimity is virtually nil, precipitating fears that delayed ratification may jeopardise funding for programmes that continue into 2021.

At their dinner on Thursday the leaders also reaffirmed foreign ministers’ condemnation of the Turkish invasion of northern Syria and its illegal drilling off Cyprus. Referring to the reports of a temporary ceasefire in Syria, brokered by US vice-president Mike Pence, Mr Tusk was sceptical: “The so-called ceasefire is in fact a capitulation of the Kurds,” he said. The EU must continue to insist that Turkey must end its action completely, he said.

As expected, the leaders confirmed the appointment of former French minister and IMF head Christine Lagarde to head the Frankfurt-based European Central Bank.

In an emotional farewell to the press on the occasion of what will probably be his last – 148th – meeting of the council, attended in various guises since his days as Luxembourg prime minister, Mr Juncker teared up as he said that he “would be proud to the end of my days of having served Europe”.

The hardbitten press corps gave him a round of applause.