Mussolini spinning in his grave at Italy’s reckless nationalists

Europe Letter: The EU needs to prove it can help resolve problems that feed nationalism 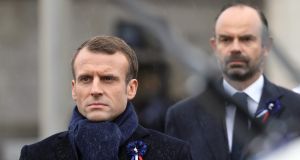 Writing of Benito Mussolini’s brand of now-reviving nationalism, the Italian political scientist Alberto Mingardi makes a telling, and not very flattering, comparison with his inheritors in Rome’s government today. They have embarked on a major battle with the EU over what is seen in Brussels as a wildly reckless budget.

Mingardi notes that the dictator made strenuous efforts to balance the country’s budget, not “because he wanted to establish his country as self-sufficient. He was determined to make Italy great again, and he knew that beggars can’t be choosers.

“When it comes to public finances, however, [today’s] new nationalism is very different from what Mussolini proposed. Italy’s populist government is not making a bid for national greatness or attempting to restore the country to some former glory.

“It is making a reckless gambit predicated on the idea that Italy is too big to fail, and will therefore be rescued by other member countries, for fear of financial contagion.”

'Patriotism is the exact opposite of nationalism. Nationalism is a betrayal of patriotism'

Whether the EU will bail out Italy is far from clear. Il Duce will be spinning in his grave.

When Emmanuel Macron last weekend spoke at the French Armistice commemoration of the dangers of nationalism and of “old demons” resurfacing, threatening peace, it was inevitable that he would be interpreted as taking a swipe at Donald Trump seated only a few paces away.

We are inevitably obsessed with Trump and tend to be drawn into his narcissistic, self-obsessed world view. In truth, however, Macron certainly had a wider target in what was in effect a reprise of public clashes with Italy’s populist government and other old demons that are rising again much closer to home in Europe.

Describing himself as a patriot, Macron spoke very much in the spirit of De Gaulle: “Patriotism is the exact opposite of nationalism. Nationalism is a betrayal of patriotism. In saying ‘our interests first, whatever happens to the others’, you erase the most precious thing a nation can have, that which makes it live, that which causes it to be great and that which is most important: its moral values.

“History,” he said , “sometimes threatens to take its tragic course again and compromise our hope of peace.” He warned that the traces of the first World War had never been erased from Europe nor the Middle East.

True. And yet Macron’s post-nationalist Europe narrative is very simplistic. It does not explain why that legacy remains, what was so enduring in the forces he decries. Or how it was the games played by the great powers in carving up Europe after the first World War – not least the particularly oppressive French demands for reparations from Germany – that later fanned the rise of fascism and Nazism.

As Leonid Bershidsky writes for Bloomberg: “By breaking up the loose, senescent Austro-Hungarian and Ottoman empires, the winners of World War I, primarily the British and the French, freed up the nationalisms that had festered within them. It wasn’t always for the worse initially – but it invariably backfired.”

Hungarian nationalism, he points out, one of the European Union’s biggest problems, feeds on the resentments created by the post-war Treaty of Trianon in 1920, when the Allies cut off 72 per cent of Hungary’s territory.

In the wake of the second World War, the confining of eastern Europe under Soviet rule bottled up the nationalist impulses, which have since given vent to forms of virulent xenophobia and Euroscepticism in countries such as Poland and Hungary.

Europe’s leaders have to do more than condemn nationalism – they have to show that the EU, successfully blamed by populism for everything from migration to economic stagnation, can actually do something to resolve the problems that feed nationalism.

In Europe, Macron wants to push ahead with ambitious integration plans despite the reservations of many EU member states, Bershidsky writes, urging caution. “Great power thinking, itself born of nationalism, whether it’s stated, as in President Donald Trump’s case, or hotly denied, as in Macron’s, provokes nationalism and breeds conflicts in the smaller countries, just as it ended up doing after the first World War.”

Not to mention in the delicate flower that is Italy.