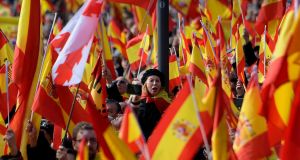 People hold Spanish flags during a demonstration called by the far-right party Vox against Catalan separatists on December 1st in Madrid. The Catalonia issue was a significant factor in Vox’s success in Andalusian elections. Photograph: Oscar Del Pozo/AFP/Getty Images

In a campaign video ahead of Sunday’s Andalusian election, the leader of the far-right Vox party, Santiago Abascal, sat astride a horse as it cantered across a featureless plain to the sound of an epic orchestral soundtrack. The bombastic clip had invited social media ridicule – after all, Vox had no presence in any of Spain’s political institutions.

But that changed when the party won 12 seats in the Andalusian parliament, far outstripping even the least conservative forecasts and meaning that Vox now has to be taken seriously. Not only does the election result mean that the far right has established itself in mainstream Spanish politics, but also that the left’s grip on the country’s most populated region has been relinquished after four decades.

The Socialist Party, which has governed in Andalusia since 1982, secured 33 seats. That was more than any other party, but, with a loss of 14 seats compared to the 2015 election, it amounted to a devastating result.

“Despite having won these elections, it’s a sad night for the Socialists,” said a shell-shocked Susana Díaz, the Socialist president of Andalusia.

“It’s clear that the left has lost ground. But the most serious thing is that the far right has got in and it’s done so in Andalusia.”

The conservative Popular Party (PP) also suffered losses, with 26 seats. But it was able to treat the result like a victory due to the Socialists’ disastrous performance and the overall electoral shift from left to right. Of the established parties, the right-of-centre Ciudadanos made the most gains, seeing its seat share of three years ago more than double to 21.

Adelante Andalucía, the leftist coalition led by Podemos, lost ground to keep only 17 seats, meaning that even if it lent its support to the Socialists, together they would not have a majority in the 109-seat parliament.

The PP and Ciudadanos have each expressed a desire to form a government. To do so they will have to reach some form of agreement with each other and also with Vox. The candidates of both the PP and Ciudadanos refused to describe Vox as a “far-right” party throughout the campaign, apparently mindful of the possibility that they would eventually need its support.

Vox’s own success has been built partly on its call for tougher immigration controls. Andalusia is Spain’s southern border with Africa, from where 53,000 migrants have travelled so far this year. Vox’s Twitter account hailed Sunday’s result as the beginning of the “Reconquest”, an apparent reference to Spain’s medieval wars between Muslims and Christians.

But arguably a more significant factor behind Vox’s southern success has been the ongoing territorial crisis caused by Catalonia’s ambition of breaking away from Spain. Casting the PP and Ciudadanos as weak in their handling of the separatist threat, Vox advocates a much tougher line and has taken legal action against the leaders of the independence movement. It has also used the fragility of the Socialist Spanish government to its advantage, claiming that the moderate prime minister, Pedro Sánchez, is propped up by separatists and the far left.

Although Andalusia has unique economic and political dynamics, this election result is likely to have repercussions beyond the south.

While Vox has been emboldened ahead of May’s European and regional elections, the Catalonia issue has established itself as an effective political weapon, even outside that region, auguring renewed polarisation on the territorial question. Meanwhile, the Socialists’ loss of their safest electoral stronghold will cause Sánchez to reconsider a plan he had been mulling to call an early general election in 2019.