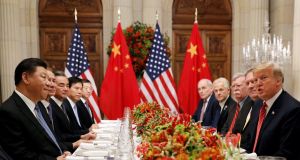 Co-operation is the best choice for China and the US, Chinese president Xi Jinping told US president Donald Trump during a Saturday dinner meeting in Argentina, state news agency Xinhua reported.

Mr Xi said he would like to exchange views on issues of common concern with Mr Trump and jointly chart the course for China-US relations in the next stage, Xinhua added.

Mr Trump said he had an “incredible relationship” with Mr Xi before the start of the meeting. “The relationship is very special. The relationship that I have with president Xi, I think that’s going to be a very primary reason we’ll probably ending up getting something good for China and good for the United States, so we very much appreciate it,” Mr Trump said, referring to trade.

Both men are in Argentina for a Group of 20 summit of world leaders in Buenos Aires.

Earlier, the group leaders agreed to fix the world trading system – but only 19 of them said they would support the Paris accord on fighting climate change.

Applause rose up in the hall when the leaders signed off on a final statement at the end of a two-day summit.

The statement acknowledges flaws in the world trading system and calls for reforming the World Trade Organisation (WTO) – but does not mention protectionism because negotiators said the US had resisted that.

The statement says 19 of the members reiterated their commitment to the Paris climate accord but the US reiterates its decision to withdraw.

The non-binding agreement was reached after difficult all-night talks by diplomats.

The US had been the main holdout on nearly every issue, officials previously said, as Mr Trump has criticised the WTO and taken aggressive trade policies targeting China and the EU.

German chancellor Angela Merkel said she hoped a meeting between the US and Chinese leaders would help resolve trade tensions between the two countries.

Ms Merkel told reporters it is important the talks “hopefully bring solutions, because all of us see that we are affected indirectly when Chinese-American economic relations are not as frictionless as a world order requires”. – AP