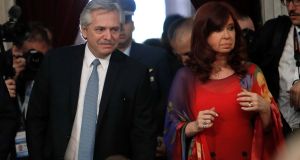 Argentine President Alberto Fernandez announced on Sunday that he will send to Congress a bill to legalise abortion, an initiative that has broad social support but is also strongly opposed by religious groups in Pope Francis’ home nation.

The centre-left Peronist president, who took office in December, will also capitalise on his strong electoral mandate to reform the judiciary and Argentina’s intelligence services, he told Congress in a speech to open the body’s ordinary sessions.

Mr Fernandez was accompanied by a crowd waving the flags of his “Frente de Todos” coalition and presented to the house by his vice president and the senate head, Cristina Fernandez de Kirchner.

The president said the legislative measures would help him keep his promise to fight poverty, which in Argentina blights almost 40 per cent of the population following years of recession and high inflation.

“Within the next 10 days I will present a bill for voluntary termination of pregnancy that legalises abortion at the start of pregnancy and allows women to access the health system when they make the decision to abort,” Mr Fernandez said to loud applause.

The initiative, promoted for years by an increasingly powerful feminist movement in Argentina, will be accompanied by a sexual education and pregnancy prevention drive, according to the Fernandez government.

Current Argentine law only permits abortions in cases of rape, or if the mother’s health is at risk. A previous bill to legalise abortion up to 14 weeks was passed by the lower house but rejected by the senate after a campaign by the country’s powerful Roman Catholic Church.

Successfully renegotiating the repayment terms of some $100 billion of public debt, which the government has said is unpayable in its present condition, will be key to achieving the latter goal.

Mr Fernandez hopes to close an agreement with private creditors brokered by the International Monetary Fund (IMF) by the end of this month.

“The most important thing is that the agreement we reach with the creditors is sustainable,” he told Argentine legislators.

On Monday, a new round of dialogues will begin with IMF officials and private creditors.