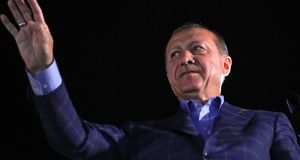 Turkish president Recep Tayyip Erdogan waves to his supporters during a rally after he declared victory in Sunday’s referendum. Photograph: Tolga Bozoglu/EPA

Turkey’s president Recep Tayyip Erdogan struck a defiant note on Sunday night following a tightly-contested and disputed referendum that is set to greatly expand his powers.

“Turkey will have the strength and capability to overcome any obstacle. Today Turkey has voted for a system of government argued and debated for over 200 years,” he told a press gathering in Istanbul.

The Yes campaign claimed 51.2 per cent of the vote, according to Turkey’s state news agency. In what will be a blow to Mr Erdogan, however, the country’s three largest cities – Istanbul, Ankara and Izmir – voted No.

The referendum result was immediately contested. Opposition parties claim a win for the Yes side was called before all ballots had been counted.

There have also been claims of irregularities in how the Supreme Electoral Council conducted the count, and media outlets criticised the fact that results came only through the state news agency.

Thousands of people opposing the outcome gathered in the Kadikoy district of Istanbul on Sunday night.

“Whether the official announcement is yes or no, we will object to two-thirds of ballots. Our data indicates a manipulation in the range of 3-4 per cent,” the Kurdish-rooted HDP posted on Twitter on Sunday night.

The leader of the Republican Peoples’ Party (CHP), Turkey’s largest opposition grouping, said his party would “never accept” the result.

Prime minister Binali Yildirim, whose post is set to be abolished after the Yes result, thanked voters overseas, the nationalist MHP party which supported the campaign, and Mr Erdogan.

“The nation has shown it will not bow to any outside forces. The best answer to them has been given at the ballot boxes. This referendum does not have any losers. The winner is Turkey,” he told supporters in Ankara on Sunday night.

The new executive presidency is expected to come into effect following the next presidential election in 2019, and will give Mr Erdogan sweeping powers to appoint ministers, dissolve parliament and enact a state of emergency.

The campaign to change Turkey from a parliamentary to a presidential system of governance, headed by Mr Erdogan and the AK Party he co-founded, argued that the change would bring stability and security to the country.

Turkey has been hit by a series of terrorist attacks by Kurdish and Islamic State militants, we well as a botched military coup in July 2016.

Opponents, including the opposition CHP and HDP parties, claim that more power in the president’s hands will signal the de facto end of democracy in Turkey, a parliamentary republic since its founding in 1923.

In a speech on Sunday night, Mr Erdogan claimed another referendum to decide the reinstatement of the death penalty may be forthcoming, a move that would put paid to any EU accession aspirations.