Future of Somalia lies in hands of African forces 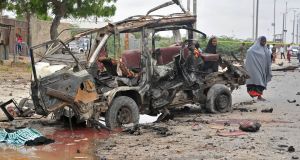 Many diagnosed this as a reaction by the Ethiopian People’s Revolutionary Democratic Front (EPRDF) ruling party to its country’s six-month state of emergency. But there was much more behind this redeployment of Ethiopian National Defence Force (ENDF) troops, including problems within the funding system for the African Union Mission in Somalia (Amisom), and within the United Nations peacekeeping apparatus.

Hence, 10 years into Amisom’s deployment, the future of Somalia and any chance of it leaving behind decades of chaotic and catastrophic bloodshed may still hang in the balance.

“Amisom needs to go on the offensive and disrupt [militant jihadist group] al-Shabaab’s forces and keep them on the back foot,” says peace and security expert Paul Williams, a professor in international affairs at George Washington University in the US. “To do this well requires ENDF troops, both because of their location, their numbers, and the enablers they can field, including helicopter gunships.”

Amisom has grown from an initial deployment of 1,500 Ugandan soldiers in 2007 to a multinational African force of more than 21,000 soldiers, with troops from Burundi, Ethiopia, Kenya, Djibouti, and Uganda (Sierra Leone withdrew its troops in early 2015).

Ethiopia’s military provides more than 4,000 personnel to that Amisom force – the third-highest contribution – and they are still in Somalia.

The withdrawn Ethiopian soldiers constituted an additional force of about 4,000 that operated outside of, but in tandem with, Amisom, providing crucial assistance to other nations’ less experienced troops.

“Many officials believe Ethiopian troops are the only forces who are able to defeat al-Shabaab, and it is Ethiopian forces that al-Shabaab fears the most,” says Abel Abate Demissie, a senior researcher at the Ethiopian International Institute for Peace and Development, who has visited Somalia frequently.

The international community pays each country in Amisom €978 per month for each soldier, while the United Nations Support Office for Amisom (Unsoa) covers all logistics costs.

Ethiopian troops outside of Amisom, however, qualify for none of that, and the Ethiopian army pays them the same as its Amisom troops for parity’s sake. Gen Samora Yunis, ENDF chief-of-staff, had said for months the army cannot sustain the cost.

But the international community wasn’t willing to pay – it was already shelling out for Amisom, and for military responses to the rise of jihadists in Mali, the conflict in Central African Republic and the Boko Haram insurgency in Nigeria and the Lake Chad region.

Others say it wasn’t just the money, and that Ethiopia’s government felt it didn’t have the diplomatic support it should have, and its efforts hadn’t been recognised.

“The country found itself under assault from dissidents and Islamists operating from both Sudan and Somalia,” says Medhane Tadesse, an Addis Ababa-based peace and security analyst. “After many attempts to resolve these problems through reconciliation, the EPRDF responded militarily in what would prove to be highly effective operations.”

Hence, during the last decade Ethiopia has increasingly become the principal military enforcer for Western governments concerned about this volatile part of the world.

Amisom was created as part of the African Standby Force – a continental and multidisciplinary peacekeeping force – whose genesis lay in violent African conflicts during the 1990s, particularly the 1994 genocide in Rwanda, and a desire for a self-sufficient African force deployable in times of crisis, and robust enough to do more than peacekeeping.

But the implementation of this capability has relied on foreign funding. During the past seven to eight years, Amisom has dominated the budget of the European Union’s African Peace Facility initiative, garnering about €1.25 billion.

Early last year, however, the EU reduced its funding to Amisom by 20 per cent, riling the contributing African governments as they scrambled to replace the withdrawn funds from their own budgets.

“The appetite in the West to spend more money in Somalia is limited. We are not personally invested like we were with Afghanistan; it’s other countries’ armies,” says an Addis Ababa-based foreign diplomat, noting the similar sizes and challenges of Somalia and Afghanistan, and whose liaison work with the African Union means he isn’t able to comment publicly. “But at the same time Europe has shouldered a huge amount of the burden with Somalia,” he says.

Either way, the fall-out has seen Kenya and Uganda – Amisom’s largest contributor with 6,000 soldiers – threatening to pull out forces from Somalia if the international community doesn’t pay up.

The overall situation hasn’t been helped by the reduction in funding to Amisom happening at the same time as an increase in funding for UN peacekeeping missions. “So you’ve now got troops on the firing line in Somalia getting paid about $500 less than UN peacekeepers, who spend much of their time playing volleyball in safe camps,” the foreign diplomat says.

An increasing problem for Amisom, according to observers, is that due to its dependence on the United Nations it is increasingly hamstrung by UN peacekeeping processes when it needs be operating as a war-fighting force.

“If, at the end of 10 years of international support to Amisom, all we’ve created is another United Nations peacekeeping force with all its limitations, then we will have failed,” says a source with the European Union in Addis Ababa, who spoke on condition of anonymity due to sensitivities about the topic. “The whole point of the African Standby Force and African peace support operations is to be able to do what UN peacekeeping can’t do.”

Precise figures of Amisom fatalities are unknown due to contributing countries not releasing numbers, but estimates range from 1,000 to more than 2,000 combat deaths.

“The withdrawal of ENDF troops outside of Amisom certainly gives al-Shabaab an opportunity to regain control of settlements it had previously lost,” Williams says. “Al-Shabaab is unlikely to resuscitate to the level it held in 2009-10 but it will be a major boon for its forces and its propaganda machine.”